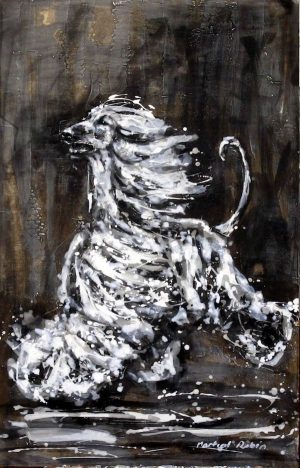 “Type” is an important word in dogdom, and we’ve discussed it a fair amount on these pages. In terms of phenotype (or outward appearances), it’s what makes a Pug look like a Pug and not a Borzoi.  We believe there is breed type to be found in expression, as well as in appearances, but we also believe there is “type” in how a breed moves.  A hackney gait is expected in a Miniature Pinscher, but in German Shepherd Dog? That would be a resounding no.

There are a lot of things that influence a dog’s gait, and all of them have to do with a dog’s soundness as well as with elements unique to that breed.  The Afghan Hound is a stellar example of breed type movement.

In a show ring, an Afghan Hound is evaluated at a trot, but the breed’s natural gait is a double suspension gallop. To do a good moving dog justice, a loose lead is imperative so that when the dog is trotting, his or her smooth, springy, almost elastic stride that so different from other breeds is shown in its full glory.

It’s unfair to any breed to condense its mechanics into a Facebook-sized post, but condense we must, and perhaps we’ll be fortunate enough to share the salient parts succinctly, but successfully.

So what makes this breed’s movement so singular?

Head carriage, for starters. Compared to other dogs with normal structure, the Afghan Hound’s head carriage is always carried vertically. Even as other breeds lower their heads as they speed up and start to single track, the Afghan Hound always carries his head up. It’s what gives the breed such a proud and noble air.  While some may be able to explain precisely why the dog carries his head this way, one source we found expresses awed bewilderment at how a dog can carry his head so high while in a full flying trot. It is, as the source concluded, an “enigma,” and we confess to liking a little mystery in our breeds.

As the dog moves out, his tail is an extension of his remarkably supple spine, but it is also carried high, unfurling a little with each stride. This “uncurling” happens when the front foot makes contact with the ground, and the dog’s forequarters act as shock absorbers and “telegraph” the impact all the way down the spine and to the end of the dog’s tail.

This is a breed with longer bones and more muscle strength in both fore and aft assemblies relative to his body weight as compared to a normally built dog. Coupled with a compact structure that enables the dog to propel not just forward, but upward, and Afghan Hound has the power to demonstrate that irresistible spring in his gait.

Unusually big feet, while helpful in snow and sand, also allow the dog to extend his reach stroke through momentum and highly flexible pasterns. These pasterns act like a shock absorbers to cushion the greater reach and drive, as well as that flouncy spring. If you watch a sound Afghan Hound move, zero in on those pasterns. You’ll notice that the front pastern “collapses” as does the rear. When the dog’s leg reaches a vertical line, the pastern “collects itself” and with the rear pastern, propels the dog onward and upward, but quickly “tucks up” to make way for the incoming rear foot to step through unimpeded.  It is a choreography of interchanging patterns of front and back feet as they traverse.

There are lots of videos on-line to watch, and some may be more helpful in discerning Afghan Hound movement than the one we share below, but not all of them are accompanied by bagpipes! Shoulder shrug, it’s a cool instrument to pair with watching this breed gaiting out. Enjoy!

Image: Afghan Hound by Martial Robin whose work we encourage you to support at the links:
http://martialrobin.fr/the-artist/
https://www.martialrobin.com/
On Facebook and on Instagram