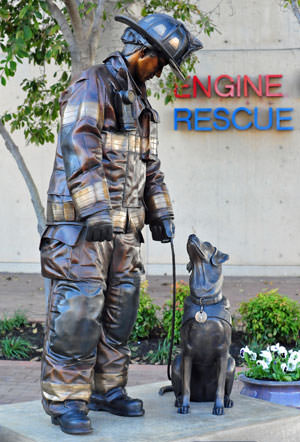 The National Fire Dog Monument entitled, “From Ashes to Answers.” sits kitty corner from the National Building Museum in Washington, DC, and most appropriately, behind Fire Engine Company 2 on 500 F Street NW. The 450-pound monument was the idea of Colorado Bureau of Investigation Agent, Jerry Means, following the passing of his first Accelerant Detection Canine (ADC) partner, “Erin.”

Stunned that no national memorial existed that acknowledges the services that ADC teams provide, Means began fund raising to have a sculpture created as a memorial. The subsequent life-size bronze created by Colorado firefighter and sculptor, Austin Weishel, depicts a firefighter and his Labrador Retriever canine partner ready to work.  Before it was unveiled, the monument went on a tour of eight cities over 15 days. When the tour was concluded, the artist noticed that the wood holding the bronze was marked with odd striations which turned out to be scratches left by dog claws when their owners pulled back their curious dogs. That dogs approached the bronze dogs to sniff them was something Weishel found complimentary.

Be sure to read Weishel’s own interesting story here.