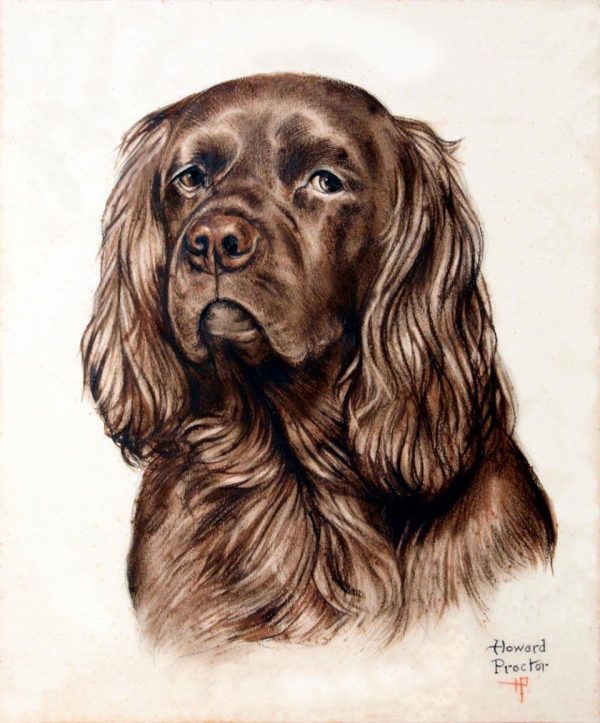 One of the last imported Sussex Spaniel was reportedly rescued from a ship that had been torpedoed by a German U-boat during WWII, a time that nearly saw the demise of the breed. Joy Freer, a breed enthusiast, is credited for having virtually single-handedly saved the Sussex from extinction during this time.

The Sussex was already by then among the rarer of the British spaniels, a low-slung breed created to be a specialized hunter particularly suited to penetrate thick, heavy undergrowth to reach and flush game birds. With its quirky trait (for a spaniel) of “giving tongue,” at least one observer wrote, “He is a noisy, babbling sort, that will rouse a cock from the densest covert. So natural does this babbling seem… that no matter how young, down go their heads and out comes the music.”

Hunting styles changed over time, and British sportsmen came to prefer a more all-around hunting dog with longer legs for speed in the field. That was not the Sussex Spaniel as it had been developed by Augustus Elliot Fuller, and so the breed suffered during the 1920s. By the late 30s, however, a few dogs of the old type began to reappear and were imported into America, including the one saved from the torpedoed boat. It was Joy Freer who kept eight Sussex Spaniels during this difficult time, and it’s believed that her dogs are the predecessors of all Sussex Spaniels today.