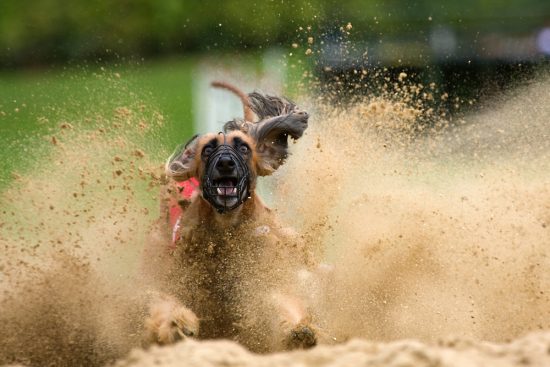 European-owned Afghan Hounds were once tried out on Greyhound racetracks, and results were mixed. Some of the dogs were just too smart to see the point of chasing a mechanical hare around a track when they could just cut across the middle of the track and pounce on the thing as it came around the bend. Far from being too dim to catch on to the spirit of the race, their shortcut strategy simply pointed out the cunning needed by an Afghan Hound when it was pursuing the real thing on the irregular mountain slopes of Afghanistan. We’re suddenly mindful that owners of retired Greyhound may be thinking right about now, “Now wait a minute, my dog raced around an oval and she isn’t dim.” We’re not suggesting that. After all, if Greyhounds hadn’t already thought of the same strategy, there wouldn’t be a need for the fencing found wrapped around the center area, right?

Getting back to the idea of running Afghan Hounds, the notion didn’t stay contained in Europe. In 1984, Steve and Sabine Mueller arrived in northeastern Australia from Germany and brought with them their Afghan Hounds.  They’d been involved with Coursing in Germany for years, and after racing their Afghans on the Greyhound tracks with the Afghan Hound Club for a few months, they decided that there had to be a more natural form of chasing for their dogs. The Muellers tossed out the idea of lure coursing, and long story short,  in 1990, the Queensland Lure Coursing Association was formed with the motto: “Dedicated to the Preservation of the Functional Hound.”

Coursing is not racing on an oval, and we found a bit of video footage taken in 1958 when “Glamorous dog breeder Jean Briggs” recruited some of her employees to try out her Afghan Hounds after the Greyhound Association gave her permission to use the track at the New Cross Stadium.  Some of the dogs were less than enthusiastic about the idea, and parts of the video are cringeworthy, but take a peek…

This isn’t to say Afghan Hounds don’t race. The Afghan Hound Club of America provides a link to information about the National Oval Track Racing Association (NOTRA) and the Large Gazehound Racing Association (LGRA) which has races similar to straight racing done by Whippets in NAWRA, WRA and CWA: the hounds race 200 yards on a straight, flat track.

The average Afghan Hound can reach speeds of up to 40 mph, about as fast as a thoroughbred racehorse, but not fast enough to catch up to an antelope, and this is why in the Middle East, hawks were trained to assist the dog in the chase. Young hawks were fed upon the head of a stuffed antelope, and thus taught to fly at that part of the animal when hunting. When an antelope is spotted, the hawk was cast off, and fastening its talons in the antelope’s head impeded its progress enabling the hounds to over-take it. It’s not a pleasant thing to consider, but it is the heritage of this beautiful breed, and the means by which people fed their families.

Racing on an oval track, lure coursing, or pursuing antelope with a hawk as a hunting partner, the legacy of the Afghan Hound as a wicked fast dog is a rich one.

Image: A racing Afghan Hound stops in the sand pit swirling up sand/DepositPhoto