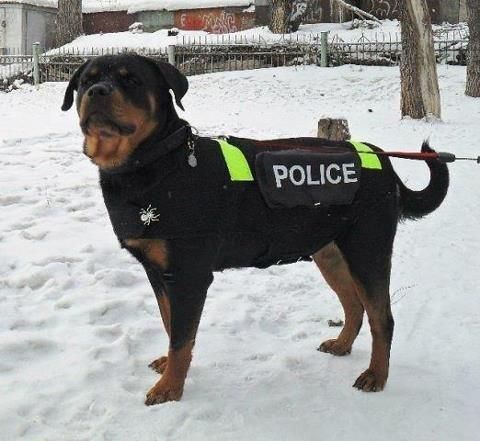 For the Rottweiler, early days in the 20th century might as well have been called the “Rodney Dangerfield” era because the breed seemed to get no respect. Overlooked or ignored in different stud books, it wasn’t until 1907 when Karl Knauf and Albert Graf founded a breed club with staying power, the Deutsche Rottweiler-Klub, that the Rottweiler got its “props.” Two of the entries in the Klub’s first breed book went on to win first places in international shows in Frankfurt and Mannheim, dogs named Russ vom Brückenbuckle and Sieger Ralph vom Neckar, but it was another pair of Rottweilers, Max von der Stahlenberg and Flock von Hamburge, who brought special attention to the breed: Max and Flock became the first Rottweiler police dogs.

Some sources write that the Deutsche Rottweiler-Klub emphasized the working attributes of the breed, and perhaps that’s true given that the German Police Dog Association (which, by 1910, had police dogs in over 600 of their largest cities) named the breed in 1910 as its fourth official police dog. The International Rottweiler-Klub – IRK (which had been the Süddeutsche Rottwiler-Klub) actively promoted the breed for such use;  Commissioner Ackernacht of the police force in Frankfurt led the charge (but then again, he was also head of the IRK for a few years).

Over time, Rotties would come to be used as police dogs in France, Belgium, and Australia, as well as in the United States. These days, however, Rotties aren’t used as police K-9s as often as they once were, possibly because police dog handlers must be able to carry their dogs with ease, and a Rottweiler is by no means a light dog. The breed also isn’t as fast or “high-jump-able” as some other breeds. That said, the breed still “reports for duty” here and there.

In 2003, Rottweilers were set to replace German Shepherd Dogs as the first choice for Scottish police forces starting with “Mac.” Sadly, Mac was taken to the vet after developing a limp in 2008 and was diagnosed with cancer. He took his final sleep on January 16 of that year, but ten years later, and Mac was still remembered by his mates as seen in this tweet from 2018: 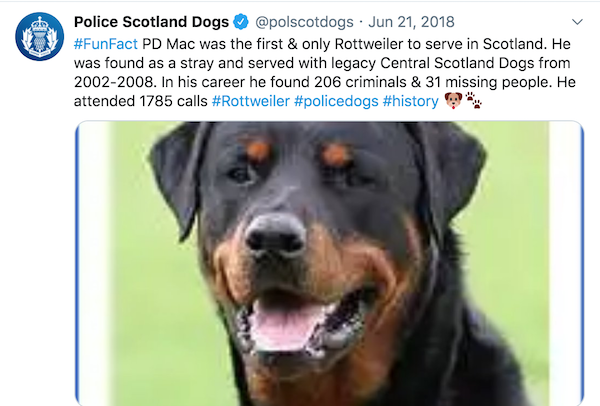 Below was one of Wiltshire Constabulary’s top police dogs (that’s in the UK),  “Juno,” one of only two Rottweilers who served with Wiltshire Police Dog Section. He retired in 2009. 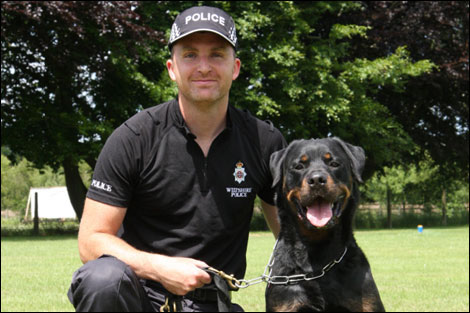 We conclude with a lighthearted look at at a Rottie “police dog:”