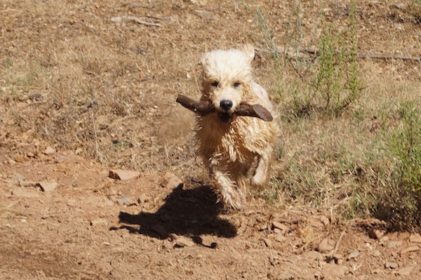 In the middle of the North Atlantic Ocean is an archipelago of nine volcanic islands called the Azores. Located 850 miles west of the Iberian peninsula, the islands are an autonomous region of Portugal. Among the largest of the islands is Terceira where tourists can lounge on sandy beaches, explore the inside an extinct volcano, and maybe even spot a Barbado da Terceira.

The Barbado da Terceira is one of Portugal most’s recently recognized breeds, a dog that calls Terveira home. How the breed got there has been the subject of speculation, though it’s entirely possible that the breed evolved from dogs brought by 15th century settlers to herd and drive cattle. In Terveira, the Barbado continues to do its job to this day, and he does it with a strong-willed assertiveness – and a few well placed nips to the hocks.

The Portuguese Kennel Club recognized the breed in 2004, and in 2005, the Barbado was presented for at a dog show in Portugal for the first time. The original breed club, the Associação Açoreana dos Criadores do Cão Barbado da Ilha Terceira, was founded in 2001, and it’s work was crucial in the recognition of the breed. The Clube Português do Barbado da Terceira was organized in 2013, and in France, the Barbado may be entered in the Société Centrale Canine.

The Barbado is actually now a recognized breed in The Netherlands, and has been since January 1, 2019, as well as in Belgium since January 7, 2019.

About 50 Barbados are thought to be living in the Low Countries of the coastal region of northwestern Europe, namely Belgium, the Netherlands, and Luxembourg, and considerably more – hundreds if not thousands, are in Portugal. There are also several Barbados in other countries such as Spain, France, Finland, Austria, the USA, and Australia. Fanciers, we’ve read, are working towards FCI recognition, and there is a Facebook page for fanciers in the Netherlands.

With its tousled hair, rustic appeal, and versatility, the day is coming when no longer will people say, “A what?” when the Barbado da Terceira is mentioned.

Image of a Barbado da Terceira owned by Andre Heuzer

One thought on “One of Portugal Most’s Recently Recognized Breeds”