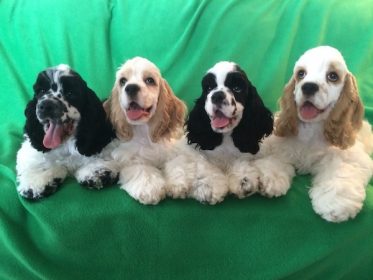 When describing a dog of two colors as a “parti-colored” dog, many people are of the impression that the word, “parti” is short for “partially.”  They’d be on the right track but in the wrong language.

In French, the word, “partially” is “partiellement” which is often shortened to “parti.” But “parti” may also come from the French word for divide or split, “partager.”  When a coat is “divided” into two or three different colors, “partager” also makes sense.

In the dog world, there’s no shortage of words used to describe two or three different colors: Harlequin (as in the Great Dane) means “varied in color or decoration.” Also used are vari-colored, variegated (a word seen in early literature on different breeds), bi-color, tuxedo, mantle, Irish Spotted, flashy, piebald (as in Cocker Spaniels), and patched (we’ve even seen “abstract”), but they are not necessarily interchangeable among breeds because there are nuanced differences between them. Harlequin and tuxedo are black and white dogs, and while Irish Spotting refers to white found on the legs, tail tip, chest, neck and muzzle of a dog, true Irish Spotted breeds tend to be Border Collies, Berners, and Aussies.