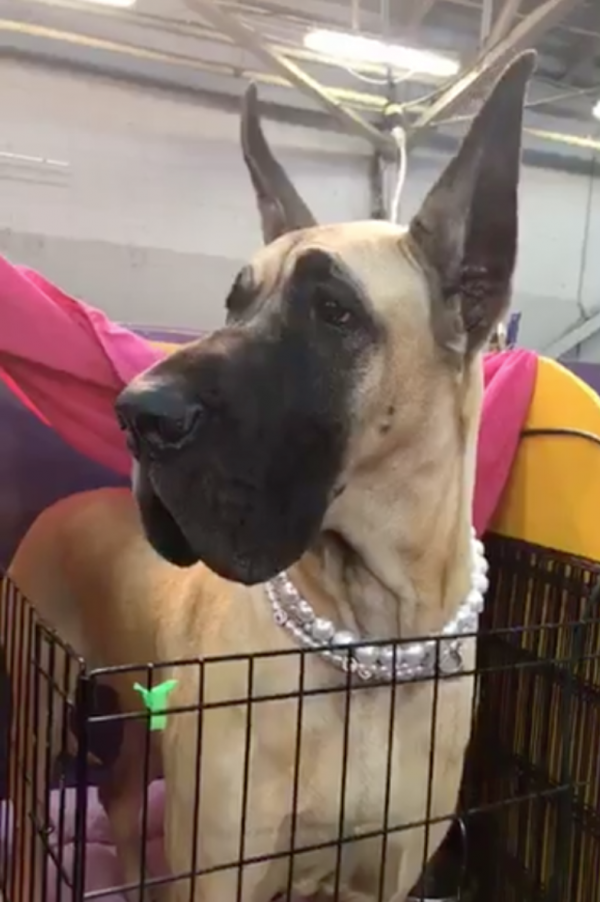 She stopped us in our tracks. It was in the benching area of Westminster, 2020 that we saw her, this magnificent young lady resplendent in her pearls. We didn’t catch her name, but we immediately snapped her photo, probably the 50th time that day her owner consented to having her dog photographed. We left with a smile on our face.

It wasn’t the first time a Great Dane rocked pearls, but to get to our point, we have to go back several decades. Stay with us.

There was a distinct way that fashion models posed in the 1950s. Hips were tilted forward, shoulders were slightly shrugged as they fell back, hand positions came from the ballet world, and chins were held high and thrust forward to elongate the neck. It was a classic “s” shape, and no one photographed it better than Henry Clarke. He instinctively knew something that Clay Cook mentioned in an article for fstoppers.com in 2014 when he said, “If you aren’t talking [to the model], you aren’t directing and if you aren’t directing then you’re not getting the shot!”

Though Clarke became a renowned fashion photographer, he started out as a window dresser for I. Magnin, a high fashion and specialty goods luxury department store in San Francisco. When he moved to New York in 1946, he got a job as a background and accessorizing assistant at the Vogue studio. It was then that he encountered the great Cecil Beaton and became mesmerized with photography. He borrowed a Rolleiflex camera, promptly left his fashion job, and began taking pictures. It didn’t take long for his own style to emerge. His images were the epitome of sophistication, and he created more swan-like necks in his models than had probably been seen before. He is especially remembered for capturing the evolution of fashion between the fifties and the sixties, and perhaps this image taken for Vogue in 1960 best epitomizes this.

The high sophistication of haute couture in the 50s had evolved to a more relaxed feel. Refinement wasn’t abandoned, mind you. The photo we linked to above still illustrates the elegant sparkle of a mousseline de soie evening coat by Maggy Rouff, but now the model stands more naturally, and she’s holding a leash made of pearls attached to a Harlequin Great Dane. French Vogue characterized it as a Beauty and the Beast theme. Personally, we think the dog is the beauty……just saying.

In the 1960s, Diana Vreeland was editing Vogue Magazine, and she sent Clarke to exotic locations where he pushed the limits of location work in color.  He and Vreeland created a new genre known as “Travel Fashion” in which new clothing trends were juxtaposed against famous architectural and archeological sites around the world. We take such photographs for granted now, but someone had to be first, and it was Clarke.

Henry died of Leukemia in Cannes in 1996 at the age of 77. He left his archives to the Musee de la Mode et du Costume in Paris, France, and named the Pasteur Institute as universal beneficiary of his estate.