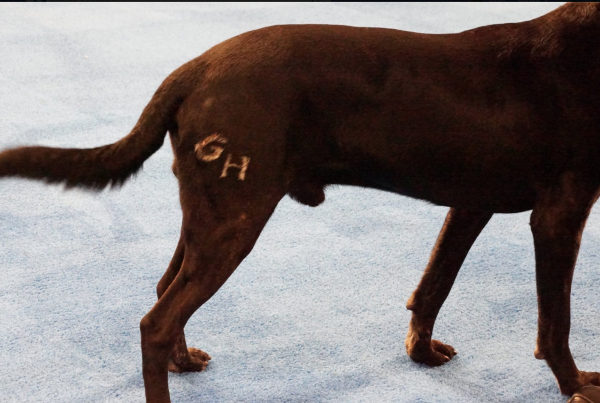 Before National Purebred Dog Day’s website went “live” in May, 2016, we had published approximately 10,000 posts on Facebook. We’re constantly moving those older posts from Facebook to this website, and it will take time to complete. When we come across a post we think is worth sharing in ‘real time,’ however, we do it, and this is one of them.

Among the earlier posts was one which mentioned that to our knowledge, the Plott is the only breed whose breed standard specifically allows the presence of an identification mark on its rump used to identify the dog when out hunting.

Official Standard of the Plott:  The Plott may have an identification mark on the rump used to identify the dog when out hunting. Such a mark is not to be penalized when evaluating the dog.

Months later at the Eukanuba Championship, words literally came to life when a Plott entered the group ring with precisely that kind of identification mark.  The photo could be better, to be sure, but in our excitement, we snapped the picture hurriedly lest the dog vanish before we got the chance. Pretty cool!