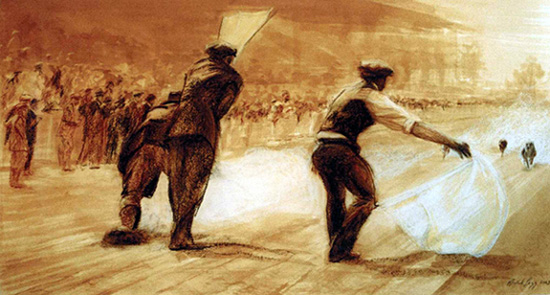 Poor, working class men in the early 20th century textile industry of Northern England didn’t have fancy oval tracks, but they still wanted to participate in dog racing.  They met in back alleys, empty lots, dusty roads and empty fields to race their dogs, and because these men already knew that their hounds would enthusiastically chase a waving rag, Whippets became their race dogs, and their race dogs became epic straight-away sprinters. Slim, clean lined, and built like a marathon runner, the Whippet’s wicked fast acceleration gave him “jack rabbit” starts covering 200 yards in 12 seconds! Whippets, according to Wilcox and Walkowicz’s, Atlas of Dog Breeds, have been clocked at up to 37 mph. Little wonder the breed was nicknamed the, “poor man’s Greyhound.”

Times change, and oval racing is an option for a Whippet owner who wants to work with their dog.  Similar to straight racing, oval track racing is run on a big U-shaped or oval track with an inner rail, and the distance is increased to a length between 220 to 440 yards. Oval races are run in groups of three to five Whippets for three or four heats, depending on the length of the track and number of starters. The grades and blanket colors and numbers are the same as for straight racing. Oval racing can involve more strategy on the dogs’ part compared to straight racing, which is a full out sprint. Smart oval racers know to go to the rail quickly and hold that position. They will cover less ground and some dogs with less speed can defeat a faster sprinter simply by holding rail position and moderating their speed to get through the corners quickly (from the American Whippet Club).

2 thoughts on “The “Poor Man’s Greyhound””