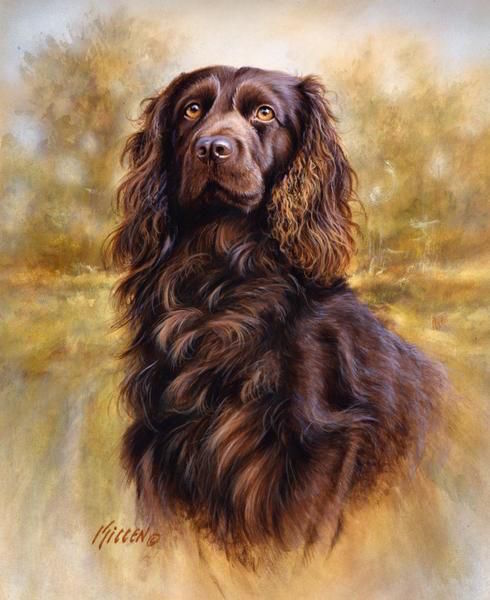 Americans have been hunting wild turkeys with their dogs since 1607 when the first Englishmen brought their quail dogs to Jamestown, Virginia. Today, some thirty states allow such hunts because of data that shows that using a dog prevents needless suffering and decimation of turkey numbers. On average, 1 of 7 turkeys are wounded every Spring and not recovered. That’s 160,000 turkeys (2006 numbers) nationwide that would have been recovered if a hunter had the aid of their dog.

Turkey hunting for a dog is a bit different in that the dog works well out in front of the hunter, quartering through the woods or fields, until he comes upon the scent of a group of turkeys, sometimes from as far away as 300 yards. The dog then breaks up the flock with a series of loud barks (actually, we’ve seen it described as “barking like a maniac) which scatters the birds in every direction. This pressure forces every single bird in the flock to fly. The trained dog never barks on the track, but does on the flush.  The hunter then goes to the “break point” spot where he heard the dog barking, then gets out of sight and waits. Turkeys, by nature, want to get the flock back together and eventually begin calling to each other.  Around this time is when hunters use bird calls that imitate the turkeys.  As for the dog, once the flock is scattered, the trained turkey dog comes back to the hunter and goes to sleep or just “chills.”

What is the best “turkey dog?” Some would point to the dog with “turkey” in its name, the Appalachian Turkey Dog created by John H. Byrne, Jr. Virginia some forty years ago. Byrne blended three purebred dogs, the setter, pointer, and Plott for certain traits that he felt made a naturally efficient turkey hunter.  Appalachian Turkey Dogs are not recognized by any established registry that we could find, but there is a purebred dog that is not only recognized by several registries, including the AKC, but was bred exclusively for turkey hunting, and that’s the Boykin Spaniel.

Boykins became popular in South Carolina as a turkey-hunting dog around the turn of the century. Some old timers will say that the spaniel’s brown coat was bred in to provide the dog camouflage as he waited for his master call a turkey in, the docked tail a man-made modification to keep a long tail wagging enthusiastically from rustling leaves in a turkey blind. Byrne’s Appalachian dogs have been typically white and black patched, and since birds see very well, Appalachian dogs often wear camouflage sacks to keep them from being seen. We suspect that the only reasons that Boykins aren’t used more often in turkey hunts is that the breed isn’t well known.

3 thoughts on “The •Purebred• Turkey Dog”