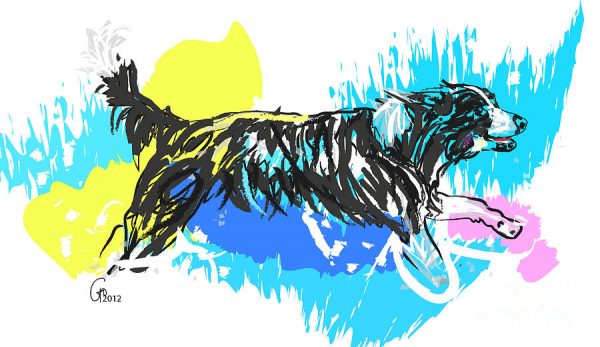 “Purling” is another word to describe “weaving,” plaiting, “knitting,” or most descriptively, “crossing over.” It happens when a dog’s front or rear legs cross over the opposite leg when gaiting. Put another way, if we were to walk a dog over an imaginary line on the ground, and in the same direction, and the dog’s feet cross over the line toward the other leg when extended as he’s coming towards you  –  that’s purling. It’s inefficient movement and a waste of energy because such movement keeps the dog from covering as much ground as he would his legs reaching in a straight line from the shoulder, through the elbow, down the foreleg, and into the paw. Ideally, a dog’s legs should move straight forward from the point of the last pad contact to the next, the back legs following in the same angled plane.

It’s important to check your breed’s standard for correct movement, and it’s not easy to say categorically what causes such movement. In some dogs, it’s the result of a short upper arm, in others, ligaments lack strength, and laxity sees elbows flare out. In a worse case scenario, a dog is compensating for pain (elbow dysplasia, for example).

“Dog Running In Water” by Go Van Kampen. This print is available for purchase here.