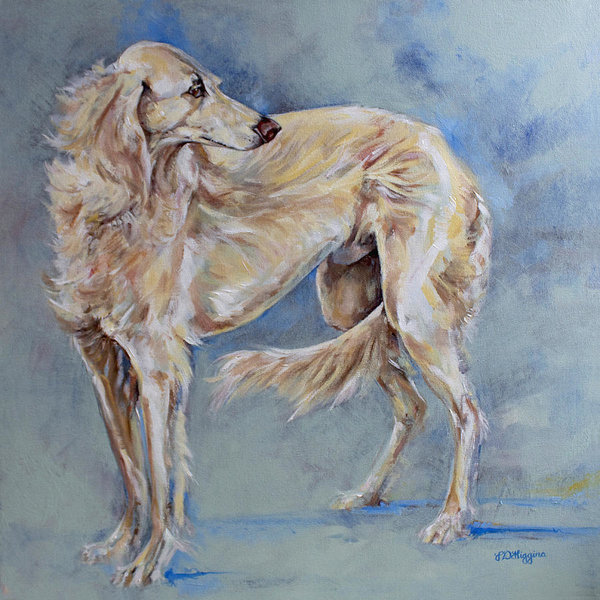 Shamir. We got curious when we came across the word in an old book on dogs. We were pretty sure we got the wrong “Shamir” when we found this You Tube video.

It was in an even older book on dog terms that we found that “Shamir” is a term for a “long coated” Saluki.  We found this interesting in and of itself because the AKC breed standard indicates that the breed’s coat is smooth with slight feathering on the legs, back of the thighs and ears. The standard also refers to a smooth variety in which there is no feathering. There is, however, no mention of a long coated variety.

It was in an old article written by Lady Florence Amherst that we learned that Arabs classified Salukis into two varieties: The smooth coated dog called Nejdi, and the feathered version called Shamir.

As an aside, Florence Amherst was the first recognized Saluki breeder in England. She imported the first breeding pair of Salukis from Arabia after seeing them during a cruise down the Nile River in 1895, and was determined to have her own. She got the dogs coming from Prince Abdulla’s Transjordanian Kennels (though other sources say they came from the Tahawi Tribe of Lower Egypt) and would go on to be responsible for the first Breed Standard published in 1907.

Semantics is everything. After researching “shamir” until we ran out of sources, we came to decide that what one old book of dog terms called “long coated” is what everyone else regards as feathered.  We hope this saves someone from spending hours looking for a long coated Saluki after also finding the word, “Shamir” in the same old dictionary.

Image: Saluki by Derrick Higgins is available as art, and as home decor and life style items here