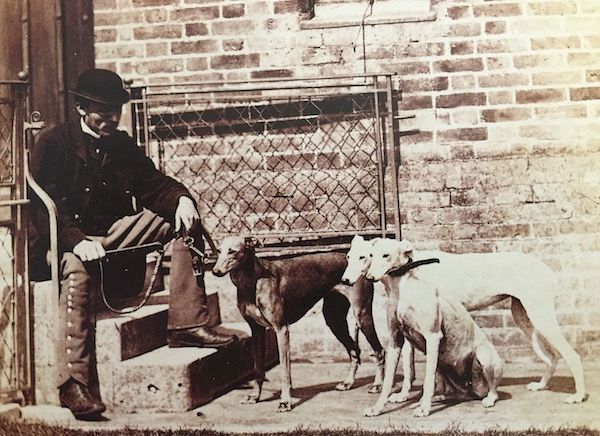 “Beauty,” “Swan,” and “Mishka” were three Greyhounds owned by Queen Victoria.  Swan had been a gift to the Queen from Dr. Hanley of the 1st Life Guards regiment in 1859, and Swan, in turn, gave birth to “Mishka” in 1861. Mishka would later whelped ‘Helios,” (not seen in the photo here).

They were all part of what would come to be called the Royal Kennels. Better known as Sandringham Kennels, the facility was established by King Edward VII in 1879 to house about one hundred dogs. It was probably Queen Victoria’s daughter-in-law, Alexandra of Denmark, however, who made full use of the kennels, the diversity of her dogs rivaling even that of the Queen’s when one takes into consideration the Basset Hounds,  Irish Wolfhounds, Scottish Deerhound, Dachshunds, Collies, Samoyeds, Fox Terriers, Pugs, Pekingese, Borzoi and Japanese Spaniels she kenneled there.

In 1901, a writer at the Lady’s Realm, a monthly magazine, Sarah Tooley, was given permission to take a tour of the facility under the guidance of the kennel’s head-keeper at Sandringham for the previous thirty years, Mr. Jackson. The tour took two separate visits to complete, and Tooley’s account of her visit appeared in “The Lady’s Realm, Volume 11.”  She wrote: 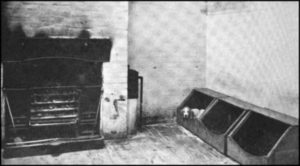 “Each kennel has an inner compartment as a bedroom, fitted with an iron bedstead and straw mattress.  They are well ventilated, with good sanitary arrangements, and are whitewashed once a year.  Leading from the bedroom is an open ‘sitting-room,’ supplied with straw and a constant supply of fresh water.  Iron gates enclose each kennel from the central yard.  Good grass runs are adjacent to the kennels.”

Tooley even got to meet “Alix,” the most widely known of the Sandringham dogs. Alix was a champion Borzoi (known at the time as a Russian Wolfhound) given to the Queen Alexandra by A.J. Rosseau. Like the current Queen Elizabeth in her younger days, Queen Alexandra was “hands-on” with her dogs, and when at home, she and kennel man, Mr. Brundson, did a systematic tour of the kennels at least once each week.  Alexandra was described as wearing a “large white apron” and carrying baskets filled with cut up bread to hand out as treats to the dogs.

These days, according to the official website of the Royal Monarchy, Sandringham Kennels house approximately twenty dogs of varying ages, including Labradors and Cocker Spaniels of various ages. The experienced gun dogs are used by members of the Royal Family during the shooting season, while the younger dogs are under training. As a point of fact, the Sandringham line of Labrador Retrievers founded in 1911 have earned respect throughout the shooting world and have been quite successful in working tests and field trials.

While Queen Elizabeth’s affection for Pembroke Welsh Corgis is well known, her father, King George VI, had a passion for game-shooting which illustrated to his daughter, Elizabeth, what a well bred and well-trained gundog could do. The Queen learned well, and as an adult, her breeding plans always focused on producing dogs that could be handled at 200 yards out. Sandringham’s 22,500 acres of fields, woodlands and water provided all the essentials needed to train a retriever, and over the years, the Queen has had up to twenty mostly black Labradors (her preferred color in the breed in contrast to the yellow her father preferred). Indeed,  the Queen has not only been the patron of the Labrador Retriever Club since 1952, but in younger days was an active member of the Club, taking part regularly in its field trials.