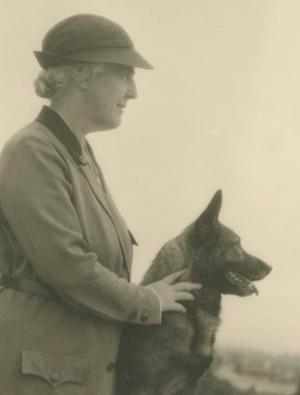 Eleanor Roosevelt, Pat Nixon, Rosalynn Carter, Jacqueline Kennedy, Nancy Reagan, Michelle Obama, Betty Ford, Barbara Bush, Hillary Clinton, and Laura Bush. What they all have in common, of course, is that each was a First Lady in the White House. They have something else in common, and that is that they were all First Ladies who appeared in Vogue Magazine.

Someone was first, however, and that distinction goes to Lou Henry Hoover, wife of President Herbert Hoover.  The portrait of her taken by photographer Edward Steichen appeared in the May 11, 1929 issue of Vogue started a tradition of First Ladies appearing in the magazine. Lou Hoover was also the First first lady to make regular nationwide radio broadcasts.

Lou oversaw a White House filled with dogs that she and Herbert both loved. Perhaps the most famous of the Hoover dogs was King Tut, a Belgian Malinois, and President Hoover’s favorite. There were also two Fox Terriers, “Big Ben” and “Sonnie,” a Scotch Collie named “Glen,” “Yukon, an Alaskan Malamute, and a Gordon Setter named “Eaglehurst Gillette.” Gillette was described as a “prize-winning dog at the prestigious Madison Square Garden show” (Westminster, no doubt)  and was given to Hoover by his campaign strategist, Colonel William J. Donovan, on Hoover’s Inauguration Day.

There were others: A German Shepherd Dog named, “Pat,” “Weejie,” a Norwegian Elkhound gifted to the Hoovers from the American Elkhound Association in February 1931,  an unnamed Pekingese, Ch. Southboro Markham (Mark), an English Setter,” “Whoopie,” a Schnauzer, “Buckeye,” another Belgian Malinois, and two more Elkhounds, “Ole” and “Olay.”

Lou also received an Irish Wolfhound from Mrs. Norwood B. Smith, a former classmate who bred them. The dog’s name was Cragwood Padraic, and the Hoovers called him “Patrick.” Sadly, the dog passed away from an infection shortly after his arrival, and to compensate for the loss, the breeder sent another Irish Wolfhound named “Patrick II.” A story appearing in the Milwaukee Sentinel dated June 5th, 1930 described Patrick as being “sensitive, shy, and shaggy,” and his all important task was to awaken the Hoovers every morning by bounding into their bedroom. Mrs. Hoover, however, decided that the shy Patrick II was not enjoying the busy White House,  and traded him for “Shamrock,” another Irish Wolfhound.  Shamrock was decidedly not shy, and a “love nip” at a Marine guard at Camp Rapidan led to Shamrock being given to a colonel.

That is a lot of dogs to have in a small amount of time, and it should be noted that most were given to family friends, a personal secretary, children, or staff.

A few years ago, the Herbert Hoover Presidential Library discovered what’s believed to be the earliest color film of the White House. In addition to seeing the President toss an exercise ball around, the First Lady is seen strolling through the garden with a couple of the aforementioned dogs: