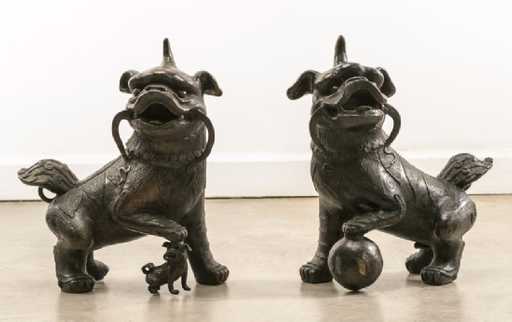 The smallest of the Tibetan holy dogs has wonderful legends associated with it, most having to do with Buddhist mythology;  it was believed that the religious leader rode to earth on a lion and carried in his arms a beloved Shih Tzu which had been created to resemble a lion.

This was fortuitous because (as the story goes) one day, several robbers surrounded Buddha with every intention of robbing and murdering him.  At once, Buddha’s sweet companion morphed into a ferocious and highly irritated lion, so large and frightening that the robbers fled the scene as fast as they could. Buddha picked up his small friend – now a dog again –  and blessed him for his courage. Many of today’s Shih Tzu reflect this blessing: Where Buddha kissed the dog on the forehead can be a different colored spot known as the “star of Buddha.” A flash of white on the forehead is where Buddha laid his finger in blessing, and markings on the dog’s back are said to represent the saddle Buddha used to ride the dog when the Shih Tzu was in his lion form.

And then there was the story of the beautiful Kwan Yin. When she refused her father’s command to marry a man she didn’t love, her cruel parent became so enraged that he put her to death. She was sent to the underworld, but put back on earth by the god of death because the compassionate young woman had prevented all souls from suffering by reading from the Holy Book.
Roaming the earth aimlessly was how Buddha found her. Smitten with her beauty and empathy for lost souls,
Buddha made her his consort. He gave her immortality, and named her the Goddess of Compassion and Mercy. Finally, Buddha gave Kwan Yin a puppy from his beloved Shih Tzu, a dog who would be her friend and protector for eternity. During the mythical Great Flood, it is believed that she sent a dog down to earth with rice grains clinging to its tail which is why she’s also worshiped as a rice goddess.  Some pieces of art show Goddess Kwan Yin with a happy little dog, its paws in the air.

And finally, it’s difficult to be certain whether the “Little Lion Dogs” were bred to resemble the drawings and statues of the symbolic lions associated with Buddha, or if the artists created their ‘lions’ in the likeness of the little dogs, but Fu Dogs (also seen as Foo Dogs) have long been guardians of Buddhist Temples, and its suggested that these are the lionized interpretations of the Shih Tzu. They can be made of bronze, ceramic, or carved out of stone, jade, cinnabar, ivory, and teak. The male version has his paw over a ball, a symbol of dual powers over nature, precious stones, energy, valor, and wisdom.  The female holds her puppy with her paw, a symbol of playing, protecting, and disciplining her baby. “Fu” in Manchurian means “happiness,” and many legends say that Fu Dogs are happy Shih Tzu forever guarding the temple of Buddha.