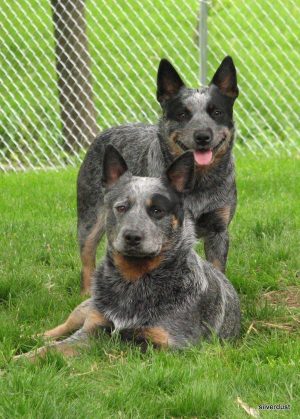 We’re suckers for dog-breed-folklore, and while some defy belief, others are harder to dismiss.

Early livestock dogs brought to Australia by settlers were known as Smithfields (after the meat markets in London), and aside from the fact that they struggled in the rugged Australian outback, ranchers and farmers complained about ALL THAT BARKING. James Timmons tried to improve the dogs (and tone down that barking) by breeding them with Dingos. The good news was that resulting dogs were quiet. The bad news was that they were also such reliable biters that they became known as “Timmins Biters.” The dogs couldn’t even be trusted to be alone with calves.

In time, an ideal herding dog would emerge – the breed we know as the Australian Cattle Dog. Their silent work enabled these dogs to sneak up stock, nip a heel, and get a critter moving – but legend says that this mute worker was used to work both sides of the fence by helping rustlers abscond with illegally gotten heads of cattle. True? Hard to verify, but also hard to disprove.

Photo of “Oz” and “Diva” by owner, Dave Campbell