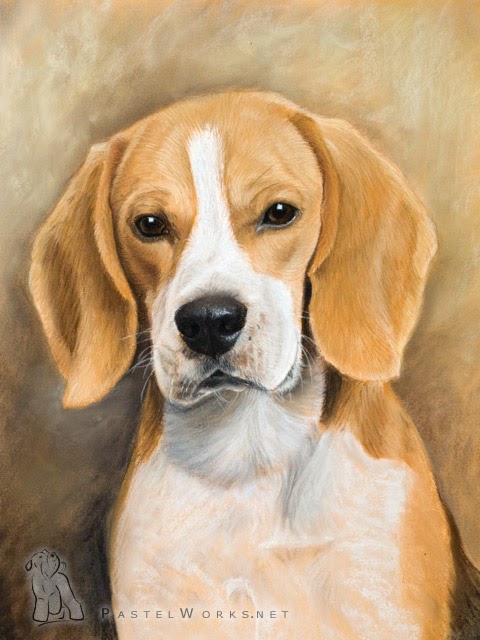 It’s thought that the very earliest origins of the Beagle lie in 5th century Greece where author, Xenophon, made references in his writings to small hounds used to hunt hare on foot.

Much later, the Talbot Hound brought to England by William the Conqueror during the Norman Conquest in 1066 was bred with Greyhounds to increase the Talbot’s speed, the resulting dogs called Southern Hounds. It is these hounds that are thought to be the modern Beagle’s ancestors.

In the 14th century, extremely small hounds were popular with both Edward II and Henry VII. By now, the dogs were called Beagles, though the origin of the word “beagle” is uncertain. It may have come from the French word for open throat, “begueule,”  the French word, “beugler,” meaning “to bellow”, from the Old English word “beag,” meaning small, or from the German word “begele,” meaning to scold. Whatever the name’s origin, it still described dogs small enough to be fit inside a gauntlet, and appreciated for their bugling voices (the latter quality led to some of the dogs being called “Singing Beagles”).   Elizabeth I also kept packs of these small dogs, now called “Pocket” or “Glove” Beagles” that stood only 9 inches tall.  Used to hunt, their lack of speed eventually diminished the desire to hunt with them, and the size eventually vanished from the breed.

In the 1700s, the Beagle fell out of favor as a hunting dog when the larger Foxhound became the dog of choice. It was British farmers who kept packs to hunt for rabbit and hare that kept the Beagle from extinction.  In 1830, Reverend Phillip Honeywood of Great Britain established a breeding program, and it’s believed that his work formed the basis for the modern Beagle breed. Honeywood, however, concentrated on breeding hunting dogs, not dogs with a pleasing appearance. Fellow Englishman, Thomas Johnson, bred Beagles who were both attractive and good hunters.

Only 18 Beagle packs remained in England by 1887, but there was a determination to keep the breed thriving and robust. The Beagle Club was formed in 1890,  its first standard written. The next year saw the formation of the Association of Masters of Harriers and Beagles, both organized to further the best interests of the breed and produce one standard type of Beagle. The number of Beagle packs grew to 44, and in 1916, a group of men formed a corporation to purchase property which is the site of many activities of the National Beagle Club. Today, the breed is beloved and one of America’s most popular dogs.