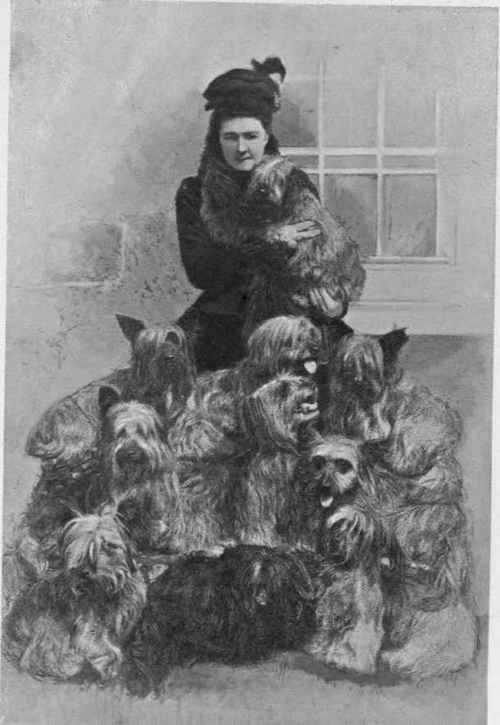 Lying off the coast of Scotland is an island that gives its name to the Skye Terrier.

The largest of the Inner Hebrides islands, the Island of Skye contains the most dramatic and challenging mountain terrain in all of Scotland. It has the only peak in the country that requires technical climbing skills to reach the summit., so it’s no surprise that the breed developed here (and the only terrier not common to the whole of Scotland) had to be tough and courageous. Developed by some of the greatest Scottish families, the Skye’s ancestors were dogs without rival when it came to dealing with vermin in the burrows, cairns, rocks, dens, or culverts found on the island, and often in inhospitable climate. Short, sturdy legs were made to dig, and a double coat able to withstand the elements made this a dog built to do a job in its environment.

Where did the dogs come from? Sources vary. One romantic version suggests that dogs that survived a wrecked ship from the Spanish Armada bred with local terriers to produce a strain with a long, silky coat. Some cynologists, however, believe that the dog that accompanied the Vikings, the Swedish Vallhund, was part of the Skye Terrier’s development. Certainly the two breeds share a “long and low” body shape.

What is undisputed is that dog first described in the 16th century is among the oldest of terriers. When Mary, Queen of Scots met her executioner, legend tells us that her Skye Terrier was there. When Alexander Graham Bell conceived of the telephone, a Skye Terrier was there. When a policeman died and his devoted dog guarded his grave for 14 years, it was a Skye Terrier. When the same family (Baron Tweedmouth, Dudley Marjoribanks, and his family) that developed today’s most popular breed, the Labrador Retriever, became associated with second breed, it was the Skye Terrier (in particular, the drop-eared Skyes – yes, they come that way). Queen Victoria helped bring attention to the breed, and in 1887 the Skye Terrier became recognized by the AKC.

Less than a year ago – May, 2015 – it was believed that only 3,000 to 4,000 of the dogs remain in the world. The thought that a breed with so much history could very well be gone in 40 years is beyond comprehension to us. It’s not sobering, it’s tragic. We sincerely hope you’ll investigate this breed when it comes time to adding a new dog to your family. If you come to decide that you and the breed are a good fit for each other, you would be doing nothing short of helping preserve a breed. No kidding.

Image of Ishbel Maria Hamilton-Gordon, Marchioness of Aberdeen and Temair, and the daughter of the 1st Baron Tweedmouth typically associated with Labrador Retrievers. The family was also associated with Skye terriers. Found on Pinterest and happily credited upon receipt of information.