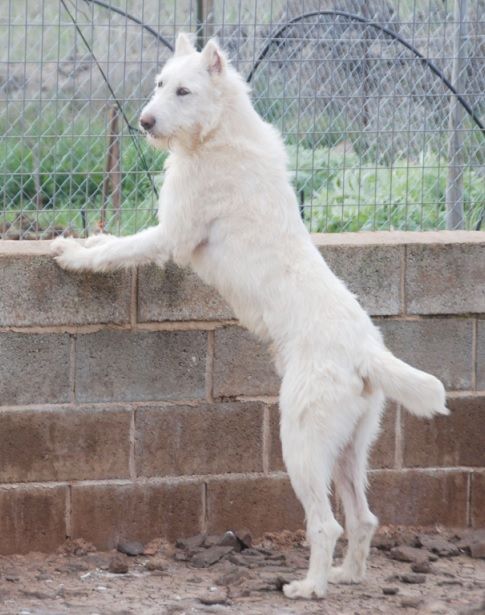 Meet the Valdueza, a dog the BOE recently recognized as a pure Spanish canine breed. Prior to this, the breed was regarded as an “ethnic group” dog by the Real Sociedad Canina de Espaﬁa, the final phase before the breed club, the Club Espanol del Perro de Montena Valdueza, could apply for recognition of the Valdueza as a purebred Spanish breed by the Royal Canine Society of Spain. They were successful!

Properly known as the Perro Montero de Valdueza, the breed is the result of over 70 years of rigorous selection started by Alonso Álvarez,  and, later, his son Alonso Álvarez de Toledo y Urquijo, Marqués de Valdueza. From the beginning, their goal was to create the perfect hunting dog for the Marqués’  “rehaia,” or hunting pack. He wanted a breed especially suited to hunt in mountains, namely the Montes de Toledo, Sierras de Extremadura and Sierra Morena.

To our eye, this breed has a fascinating appearance.  It is large, white, hardy and fast, attributes the breed inherited from the white, long haired Podencos Campaneros that Álvarez bred with lightly built Mastins he found in Extremaduia. From the mastiffs, the breed inherited power, grip, and a little bit of majesty.  The Valdueza is not exactly a griffon, but it has griffon blood coursing through its veins, the result of Álvarez having incorporated the Griffon Nivernais used in France into his breeding program after learning of the breed’s tenacity and trailing ability on wild boars.

The breed standard calls for a short, shaggy coat that is preferably white or waxed color, and pale orange or sand-colored spots may appear on the head and body. We came across mention of Valduezas with black ears and spots on their head and body, dogs called, “Urracas” (Spanish for Magpies), but we assume these dogs fall well outside the standard.

In their native country, the ears are cropped and the tails docked to about 7 inches.  The dogs are described as sociable, obedient, and easy to live with for both people and other breeds.

Though some of us may not understand what’s being said in the video below, it affords a chance to see the Valdueza “in the flesh,” as it were:

These seem to be lovely dogs, and one hopes they fare better than other hunting dogs in Spain that frequently meet a bad end.  Indeed, one source actually stated that as a Spanish hunting breed, the dogs may be abandoned or get lost at some point, and will need rescue. The writers hoped that because so little about the breed is written in English, they could raise awareness of what these dogs are.