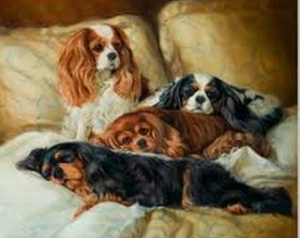 Every day was a good day for a Cavalier King Charles Spaniel under the monarchies of the Stuarts. Already popular as companions, the dogs believed to relieve aches and pains (one reason they were known as “comforter dogs,” or “Spaniel Gentile”) were championed by Charles I. Legend says that every spaniel in England wept when Charles I was put to death, but none more so than the black and white Cavalier named, “Rogue” who is said to have accompanied the King to his execution. Following Charles’ death, Oliver Cromwell was described as parading the poor dog around as a trophy of his victory over the king.

We suppose it would have been small comfort to Charles I to know that in a way, he ultimately had the last laugh since there is no Oliver Cromwell Spaniel, while the breed that bears the name, “Charles” is beloved in the 21st century.  In truth, it was Charles II with whom the breed was most associated. It was Charles II who had as his constant companions the wonderful little dogs, and it was Charles II who dictated (so they say) that they be allowed access to any public building, including Parliament and public houses. And, it was after Charles II that the breed was named accordingly, “King Charles Spaniels.”

Even James II, Charles’ successor, kept spaniels at court, but the string was broken by William III of the House of Orange whose preferred breed was the Pug.