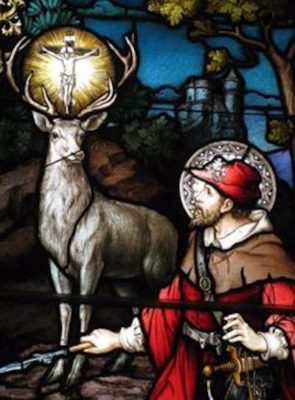 There have been more French scenthounds over the centuries than one can shake a stick at, figuratively speaking, and indeed, many sources believe that the French created more scenthounds than any other country on earth.  Two breeds have often been sited as stand-outs in influencing modern French hounds the most, the Saintongeois and the Poitevin, but before them came an even more influential dog, the Saint Hubert Hound,  known to French speakers as the Chien de Saint-Hubert.

The breed was created sometime between 750 and 900 A.D. by the monks at the Saint Hubert Monastery near Mouzon, and their work is believed by many to be the earliest known deliberate dog breeding program.

The monastery had its roots in a legend. Hubert, the son of the Duke of Aquitaine (and later to become St. Hubert) was hunting one day when a stag approached him with the message that unless he repented, he would suffer the fires of hell.  Not one to mess around with a talking deer, Hubert went on to become a bishop, and in time, an abbey was built in his honor.  As an aside, St. Hubert also became the patron saint of hunters.

As mentioned earlier, the monks at the St. Hubert Abbey bred large scent hounds as they hunted the forest in honor and respect of Hubert. It became a tradition for the monks to send several Saint Hubert Hounds to the King of France every year as a tribute, and he, in turn, gave the dogs as gifts to his nobles. In this way, the dogs spread out throughout Europe and would impact subsequent breeds including the Billy, the Porcelaine, the foxhounds of England, the Basset Hound, the Grand Anglo-Français Blanc et Noir, the French Tricolour Hound, and so many more.

Wonder, you may, about what this important breed must have looked like, but to dogdom’s very good fortune, we know about the Saint Hubert Hound’s appearance because dogs from the St. Hubert’s line exported to Great Britain in the eleventh century are what we know as the Bloodhound today.