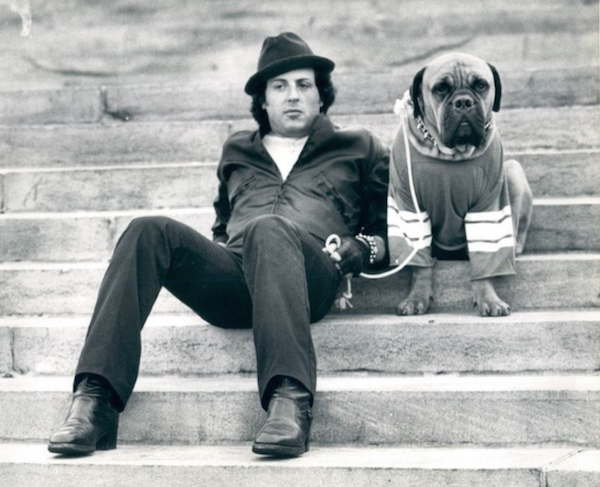 Bullmastiff owners may have been tickled to see their breed in the iconic film, “Rocky,” but perhaps at the time, many didn’t know that the dog was Sylvester Stallone’s own dog, “Butkus.” Named after the football player, Dick Butkus, the dog got the movie part because money was a huge issue in getting the movie made. Trained dogs simply cost too much, and since Butkus was already there….. In an interview, Stallone said, “In the original Rocky script, Rocky owned a scruffy ‘fleabag.’ “I was surprised that a scruffy animal ‘fleabag,’ trained and for rent to movie companies, did not come cheaply. Since our budget didn’t allow even for a feeble hamster, much less a trained dog, the producers asked if I happened to have a beast of my own. I responded that I had a thing called Butkus, a throwback to the Stone Age. I talked the proposition over with Butkus, who promised to give it his best shot. Unfortunately, a few days before his acting debut he took a nap on a wet carpet and one side of him turned red. We couldn’t use a two-toned beige and red dog, but fortunately he finally came clean.”

Stallone got the idea for “Rocky” while watching a closed-circuit broadcast of Muhammad Ali’s bout with Chuck Wepner. When Stallone saw the “Bayonne Bleeder,” a career journeyman, knock Ali down in the ninth round, inspiration came to him.  In a 1976 interview with a New York Times reporter, Stallone said it took him 10 months to write the script after watching the Ali-Wepner fight: ”I was watching the fight in a movie theater,” he said, ”and I said to myself, ‘Let’s talk about stifled ambition and broken dreams and people who sit on the curb looking at their dreams go down the drain.’ I thought about it for a month. That’s what I call my inspiration stage. Then I let it incubate for 10 months, the incubation stage. Then came the verification stage, when I wrote it in 3 1/2 days. I’d get up at 6 A.M. and write it by hand, with a Bic pen on lined notebook sheets of paper. Then my wife, Sasha, would type it. She kept saying, ‘You’ve gotta do it, you’ve gotta do it. Push it, Sly, go for broke.”’

See a compilation of Butkus’ “Rocky” appearances in the clip below, but start at the :16 mark as the beginning is just still photographs:

Stallone was financially strapped for several years and was actually forced to sell Butkus before he hit it big.  A short time later, when Rocky was in the works and he had more money in his pocket, he had to try to get the dog back.  “The other family had owned him for six months,” Stallone says.  “They weren’t exactly thrilled, but I said, ‘Please.’ I said, ‘This dog belongs in the movie.’ He had suffered along with me for two years. I said, ‘Please let him have a shot in the movie.’” The family relented and released Butkus back to Stallone.

“Butkus and I had some lean years together,” said Stallone. “I kept promising him that if we made the big time, he’d always go first class.” And he did. Sadly, Butkus died of a heart attack in 1981. In a 2015 interview, Stallone said of his old friend: “He’s still my desktop wallpaper.”