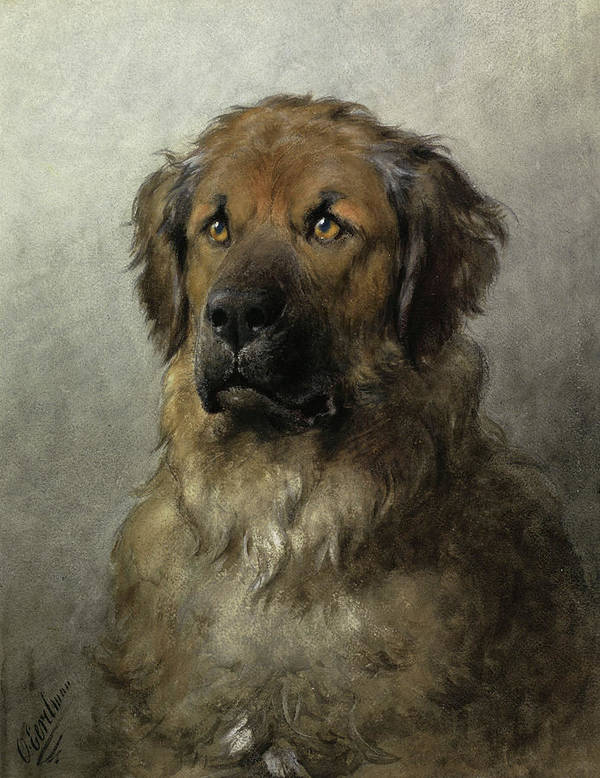 Heinrich Essig had created a loving, loyal, and big dog in the Leonberger, but when he died in 1889, he left his mortal life behind without leaving breeding records, let alone a standard for his breed. Essig was a master at marketing. Details about his breed, not so much.

Some who followed the breed were of the understanding that Essig had bred a Landseer Newfoundland bitch with a St. Bernard male, and crossed them for four generations. Then he outcrossed with a Pyrenean Mountain Dog, and crossed again with a St. Bernard. The Leonberger breed was born, or so it was thought. We may never really know, but modern genetics suggest that creating the Leonberger from just those breeds was this side of impossible.

It’s remarkable, really, that a dog owned by empresses, princes, king and czars, figureheads that valued bloodlines, would have such an opaque background.

One source reports that the breed’s sketchy background – and the developer’s taste for fame and fortune, tainted the Leonberger in the eyes of official cynologists.  They actually tried to ban breeders from dog shows because they believed it was unethical to produce dogs only for the bottom line.

So what did these people do?

Were it not for the enthusiasm of “regular” owners, the “Leo” might have been a short chapter in the book of large breeds, one that faded into obscurity. A club was formed, but it didn’t last long. Not until 1895 did the “Internationaler Klub für Leonbergerhunde” have staying power. Its first president, Albert Kull, was also the author of the first Leonberger Standard, and he likely benefitted from the sleuthing of Karl Stadelmann and Otto Josenhans who tracked down any known or suspected Leobergers. In all, they found some 30 dogs. Between 1922 – 23, a breeding program began with half a dozen males and an equal number of bitches.  By 1927, 342 Leonbergers were registered. Despite WWII, breeding carried on, and twenty-two pups were registered in 1945, and two years later, there were twenty-seven.  Hans Weigelschmidt and Albert Kienzle later lead the way to revising the German standard, perhaps only because Kull’s 1895 version was so long.

In America, the Leonberger Club of America was formed in 1985, but the breed wasn’t officially admitted to the AKC until 2010. We will happily correct any error, but to our knowledge, the breed has had five standards between the original standard, the standard revised by Weigelschmidt and Kienzle,  the FCI standard of 2002,  the United Kennel Club’s standard of 2009, and the AKC’s standard from 2016,

All that said, perhaps our favorite description of the breed comes from Nicole Ellis, a certified professional dog trainer and pet expert with Rover.com: “Leonbergers are so jumbo-sized and lion-esque that they sometimes look like they’re straight out of Narnia.”

Image: Head of a Leonberger in watercolor by Otto Eerelman done in 1892, prints available here