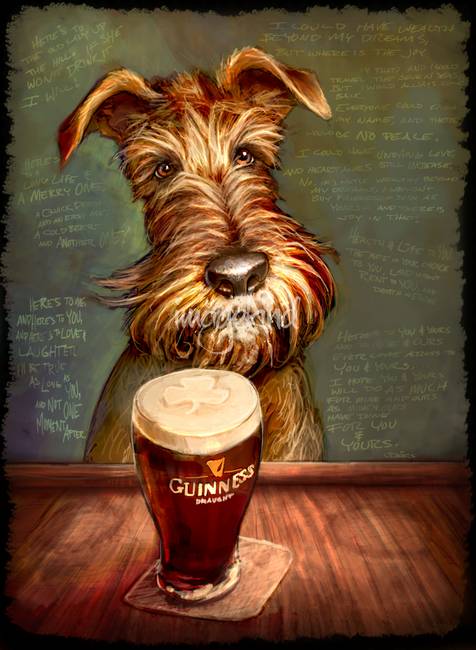 We may never know if the legends, myths, and “old wives tales” passed along to us are true or not, but this much we tend to believe: Where there’s smoke, there’s a least a spark, if not a germ of truth.

The setting was Africa is this particular story, and the dog in question was part of a pack that had gone out to hunt lion. The pack got a big cat cornered in a dense thicket, but try as they might, nothing budged the lion. Suddenly, and with a roar that we think in lion said, “WTH,” the lion bolted, his tail stuck straight out behind him. Latched onto the tail for everything its 25 pounds was worth was an Irish Terrier.

True? Who knows. But the spirit of the story is utterly believable to anyone who knows Ireland’s “Red Devil.”  Just ask Debbie Girard. In the book, “Terriers of Scotland and Ireland,” author, Bryan Cummins, PhD, shares the real life encounter that Irish Terrier, Ghillie” had with a cougar in 1991. “Ghillie,” accompanying his boy, Aaron home from school, encountered a cougar that authorities believe was anticipating the pair. “Ghillie” threw himself at the female cougar with a ferocity the cat wasn’t expecting. Aaron made it home, but came back to save his dog armed with ski poles and snowballs. It made no difference, the cougar wasn’t letting go. Aaron ran to neighbors for help, and his mother, Debbie, came to the scene banging a shovel against the pavement to scare the cat off. Imagine watching your dog getting mauled. The cat had “Ghillie” by the head and was literally chewing on the dog when the cougar decided the dog wasn’t worth the effort and dropped the dog where she stood.

The damage had been done. An eye was dislodged and hanging from its socket. The dog’s skull was torn open, his brain exposed. In spite of this, “Ghillie” made it to the family garage, game to continue the battle. By then, authorities had arrived and dispatched the cougar, but “Ghillie” was now in shock. Incredibly, when Debbie rushed to his side, he met her with a wagging tail.

Two days later, Ghillie was eating. Two weeks after that, he was running around and playing. Though he remained blind in one eye, very little slowed him down. This is a good place to share a snippet from the Irish Terrier breed standard:

“There is a heedless, reckless pluck about the Irish Terrier which…coupled with the headlong dash, blind to all consequences, with which he rushes at his adversary, has earned for the breed the proud epithet of Daredevil.”

Ghillie was these qualities personified, and for his courage, he was honored by the Irish Terrier Club of Canada. There are several terriers indigenous to Ireland, but the Irish’s tenacity, courage and pluck are legendary. Just ask Aaron and Debbie.

Irish Terrier by Sean O’Daniels. Please visit his site at www.painterofpaws.com to see more of his work, or contact the artist about capturing your breed.