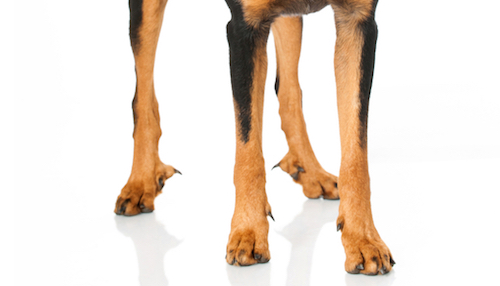 Given that our last post was on Toller feet, readers may begin to suspect we have a foot fetish.  Maybe we do. A dog’s “wheels” are critically important to dogs, particularly working breeds, and while there’s not as much variety in feet as there are among breeds,  some breeds have glorious “foot features” that just won’t be found in other breeds (think Lundehund). With this post, we’re extolling the glory of the Beauceron foot, or more specifically, its magnificent dewclaws.

Dogs almost always have dewclaws on their front feet/forelegs that were thought to be vestiges of thumbs (they actually have bone and muscle in them). Occasionally, a dog will have them on the back legs, as well, and in some breeds, the back dewclaws have little bone or muscle at all.

In certain breeds, dewclaws offer stability on uneven surfaces. When dogs run, front feet often bend to the point where dewclaws come in contact with the ground. In some scenarios, say, when the dog is turning, running at high speed, or treading on slick surfaces, dewclaws provide extra traction and help stabilize the carpal joint. Dewclaws serve to help some breeds climb trees, or climb out of water if the dog has broken through ice. In other breeds, the only thing dewclaws seem to be good for is getting snagged on anything and everything, and in a worse case scenario, getting ripped out of the pad. When acquiring a puppy, it’s important to know the standard for its breed, what the activity expectations are for the puppy as an adult, and to trust the knowledgable heritage breeder about removing dewclaws when the puppy is between three to five days old, and the procedure is forgotten less than an hour after it’s been performed. But we’ve digressed from the Beauceron.

The Beauceron is a breed that was used to move herds of 200 to 300 head up to 50 miles a day, and do it without showing signs of exhaustion. These dogs not only have double dewclaws on their back legs which form well separated “thumbs” with nails placed rather close to the foot, but anything less than double dewclaws on each rear leg is a disqualification in the breed. One source we checked says it’s a French tradition for French herding and flock dogs to have double dewclaws in the rear. Some say it goes back to the early days of the breed when shepherds thought the best herders had double dewclaws. Eventually, through selective breeding, single dews were bred out. Now, some regard double dewclaws as a sign of a true Beauceron. We always defer to breed experts, so input from our Beauceron friends is welcome – and if you have more pictures of those glorious dewclaws, let’s see ’em!

5 thoughts on “The Beauceron’s Magnificent Dewclaws!”