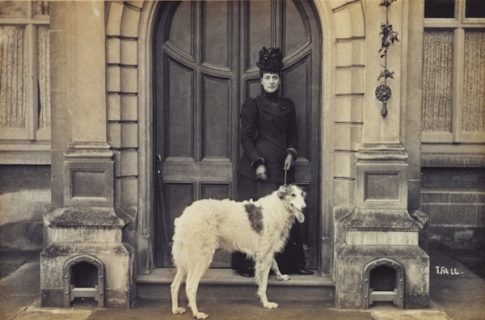 Few dogs generated as much public interest in their day as “Alex,” a Borzoi owned by the Princess of Wales (1844-1925), later to become Queen Alexandra. When “Alex” was gifted to the queen by her brother-in-law, Tzar Alexander II, the breed was known as the Russian Wolfhound. Alexandra wasn’t keen about hunting, but she did find her sport in the dog show ring. “Alex” (the dog) won over one hundred awards, including the famous 500 Guinea Dohlpur Gold Cup. People lined up by the hundreds just to catch a glimpse of the famous royal dog with his mistress.

The Borzoi’s introduction to the British Royals, however, likely started with Alexandra’s mother-in-law, Queen Victoria, who was gifted a pair by the Czar. Her son, the Prince of Wales, afterwards King Edward Vll (and Queen Alexandra’s husband), was also given a pair named “Molodetz” and “Oudalzka.” These dogs were exhibited to the public in London, and it’s said there are even records of their offspring being exhibited at shows. The association of Borzoi with the British Royal Family was a happy one that extended over fifty years, in large part because Queen Alexandra continued to exhibit and breed them.

2 thoughts on “The Borzoi and British Royals”