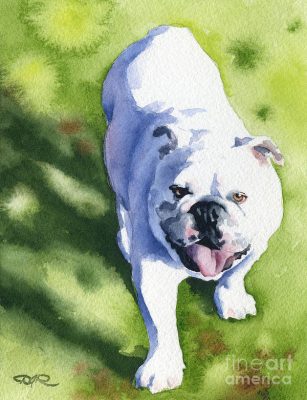 In a post about gait, let’s see if you can spot something in the film clip below (just keep scrolling):

Though perceptions of Bulldog type may have (or not) varied in the fifty-four years since this video was filmed, what hasn’t changed is the Bulldog’s gait, and you may have spotted it in the video.

That the breed standard describes the Bulldog’s gait as “peculiar” shouldn’t be interpreted as bizarre. Bear in mind that the first stab at writing a standard was in 1864, well into the Victorian era. In those days, “peculiar” as a characteristic meant “unique to,” and this is most apt to be what Birmingham fancier, Jacob Lamphier, had in mind when he started writing it.

Nearly thirty years later in 1890, the Bulldog Club of America was formed, and it utilized the English Standard.  Today’s AKC standard has kept the word, “peculiar” as a means to describe the Bulldog’s style and carriage, and adds that it is “loose-jointed, shuffling,” has a “sidewise motion,” and that gives the dog its “characteristic roll.”

So why do Bulldogs roll?

As tempted as we are to wisecrack, “Because that’s how Bulldogs roll,” it’s not as helpful as pointing out that Bulldogs are shorter legged in the front, higher in the loins, wider at the shoulders than the rear, and heavy set. They’re also built like a “double wide” which accounts for Bulldogs also rolling laterally up front. It’s basic geometry: Such a “structure” is going to have an exaggerated roll. If you doubt it, get down on all fours, lower your shoulders below hip level, spread your arms and legs, and start “walking.” You’ll feel it.

One would do well to remember, however, that none of the aforementioned aspects of the breed are a license for a Bulldog to move in a stilted fashion. The Bulldog standard makes clear that the Bulldog’s movement must be “unrestrained, free and vigorous.” They should never appear to be running downhill, and should never “pound the pavement.”  Good moving Bulldogs have a fluid, smooth, back and forth roll to their rear,  and there’s no mistaking it for any other breed.

We conclude with a “running of the Bulldogs,” a cute Geico commercial from 2017.  You can spot just a tiny bit of the Bulldog gait at the very end.