Since 1982, the Canary Islands has had two flags, a civil flag and the state flag, the latter of which includes the coat of arms.  A close up of the coat of arms is below: 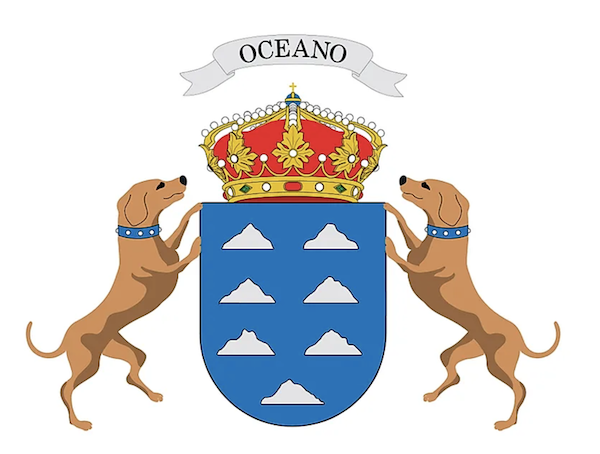 The Spanish royal crown appears above seven gray shapes that represent the islands – or archipelago –  in the Atlantic Ocean (the islands are an independent community of Spain).  That two dogs support the shield should not come as a surprise to anyone in the dog world, nor to anyone who is familiar with the islands because the Canary Islands are named after dogs.  Some historians believe that when ancient Romans landed on the islands, they were struck by the many large and fierce dogs there, and thus the moniker was thought to come from the Latin term, Insula Canaria, or Island of the Dogs.

The coat of arms has not been without controversy.

Some of the fuss was over the collars on the dog’s necks. There were seen as a symbols of submission that should be removed, though one of political party didn’t see it that way, and didn’t support the idea of removing the collars, so they stayed.

More recently, there was consternation over the dogs, themselves. The Government of the Canary Islands decided to remove the two dogs from official forms and public buildings (though they remain in the Coat of arms) in order for the “corporation mark” to be “more modern and easier for citizens to identify with.”

It didn’t go over well.

It should be noted that the first mention of dogs in relation to the Canary Islands dated back to the Mauritanian King Juba II who, between 30 and 25 BC, had sent a marine expedition that came across the islands. The discovery was described by Pliny, who wrote that the Canaries received this name “for their dogs, two of which were sent to Juba.” In 1722, the historian, José de Viera y Clavijo, wrote about the shield with a dog on each side for the first time.  Archaeological excavations in several burial caves in Tenerife also revealed that dogs were buried with their masters so they could “guide the soul to the region of the dead,” this according to historian, Manuel Curtó.

Canarians were attached to their canine symbol, and were none too pleased about their removal.  Some speculated that it was the breed of the dogs themselves, the Presa Canario, that prompted the Government of the Canary Islands’ action. Importation and sale of the breed was prohibited in Australia and New Zealand, and banned in some other countries, and some theorized that the Government wanted to distance itself from the breed.

That others have abused this powerful breed speaks more to the nature of man than to the breed, itself. The AKC includes the Presa in its Foundation Stock Service, and describes the breed as having “a balanced temperament…obedient and docile with family members…devoted to his master…and suspicious of strangers. Certainly this large, molossoid type dog is not right for a submissive or first time owner, but in our view, no one breed is right for every owner.