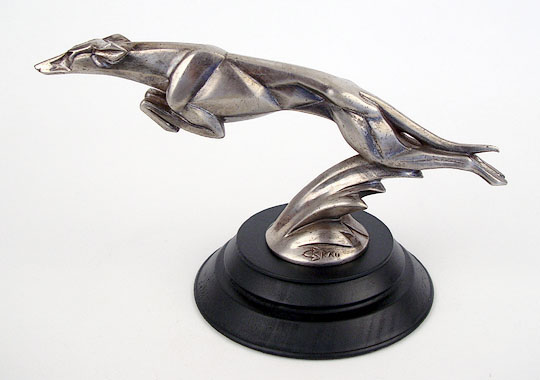 In the early years, automobiles had radiator caps outside of the hood (or bonnet, if you’re a Brit). The exposed radiator cap was usually the first thing anyone noticed on a car, and it soon became a focal point for automobile personalization. If you think about it, we instantly recognize the three-pointed Mercedes-Benz ornament, the Cadillac’s crest, and if you’re a gear head, the Pontiac’s latest version on the theme of Native American chiefs.

Some hood ornaments are admittedly a little obscure, but only because they’re old. The 1933 Hudson Essex Terraplane had a Griffin for its hood ornament, while the 1935 Chevrolet had an eagle.

In the grand scheme of things, however, it makes perfect sense to recruit a fast animal as a symbol of the automobile company that makes the vehicle. The Jaguar, of course, comes to mind, but there’s another fast critter out there, and Delage Motorcars used it.

A leaping Art Deco Greyhound designed by French sculptor, Casimir Brau, graced the radiators of the 1928 Delage and the ’31 Lorraine-Dietrich. These days, the originals are very hard to find – and quite expensive! Even modern reproductions can command hundreds of dollars. In fact, eight years ago, a wood mounted version of this hood ornament fetched $1,064 at a Bonhams auction.

Delage wasn’t alone in using a Greyhound. When Henry Ford purchased Lincoln during its bankruptcy, Ford’s son, Edsel, commissioned the design for the Lincoln Greyhound hood ornament in 1927 not only as a way to put his own stamp on the cars, but to have the public associate the Greyhound’s speed with the company’s vehicles. The Greyhound hood ornament was created using the same lost wax method that Rolls-Royce used for its “Spirit of Ecstasy” (flying lady) hood ornament.

Greyhounds stayed on the Lincolns until the 1930s at which time the ornament was switched over to a coat-of-arms and knight’s helmet hood ornament. Ford picked up where Lincoln left off and featured the Greyhound on its Model 48 and DeLuxe Fordor until 1936. Over time, both automakers abandoned the Greyhound.

These days, we don’t see hood ornaments as much as we used to. In part, this is because of fears about how much they affect fuel economy: A smooth hood reduces drag, so bye bye hood ornaments. Too, car owners got tired of having the ornaments literally ripped off their cars, so most automobile manufacturers quit adding them. Not Rolls-Royce. Since 2003, all modern day Rolls-Royce cars have the hood ornament mounted on a spring-loaded mechanism that automatically detracts into the radiator shell if the three inch icon if hit from any direction. This makes is about impossible to steal the Flying Lady.
Regulations were also introduced in the United States in 1968 limiting the appearance of fixed stand-up hood ornaments because projecting decorative designs on a car’s hood can increase the risk of injury to pedestrians in the case of an accident.

Hood ornaments (known as “mascots” in the UK) are one of the more collectable items out there, and you can read more about them here.