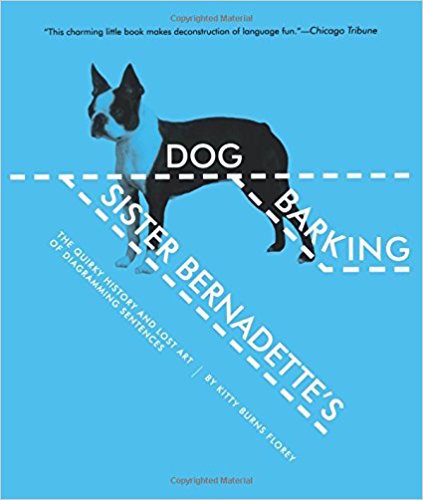 4. Draw a slash if there is a predicate nominative or predicate adjective.

By now, we’ve lost some of you, but some of you still with us might be smiling at the memory of diagramming a sentence, a device many of us were taught in school as a way to visualize how different parts of a sentence fit together.  Chances are even better that you learned diagramming if you were taught by nuns (survivors of the St. Joseph Order, here). We don’t know if diagramming is still taught in schools, but as recently as 2014, the Huffington Post shared a primer on how to diagram a sentence, so it can’t be all that dated.

We thought you’d get a kick out of knowing that a popular book on the subject (well, as popular as a book on grammar can be), Sister Bernadette’s Barking Dog: The Quirky History and Lost Art of Diagramming Sentences, features a Boston Terrier on the cover.