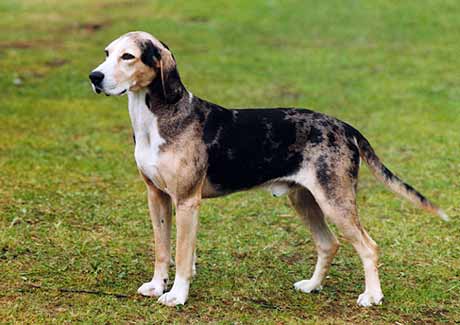 It’s among our favorite breed names, and while tempting to ascribe “Dunker” to some amazing acrobatic move on the dog’s part, it’s simply the name of the man who created the breed, Captain Wilhelm Dunker, a Norwegian author and military officer. Dunker wanted a scenthound that could work in his home of Norway, described as one of the most challenging places for a hunting dog to work in the entire world.

Outside of their drive and excellent scent-trailing abilities, Dunkers are most well-known for their unique dappled coat and are one of the few hounds carrying a marbled blue color pattern created by the merle gene (the dappled Dachshund, Kerry Beagle and Mountain Cur are three others). Dunkers undoubtedly inherited the gene from their  Russian Harlequin Hound ancestor, but the breed does also appear in a tan-brown color, though this is less desirable according, and a body that’s more than 50% white is a breed standard disqualification.

2 thoughts on “The Dunker: Exceptional Scenthound, and Special For One More Reason”