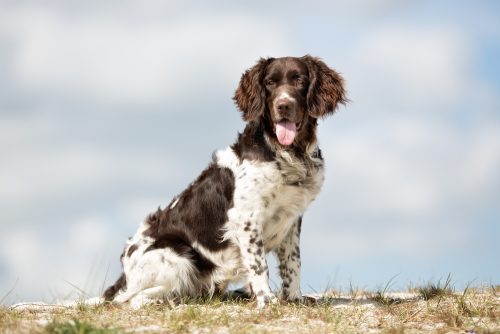 The concept of the Jagdgebrauchhund – or versatile hunting dog – became popular in Europe at the beginning of the 20th century, and formal organization of several versatile hunting breeds were founded at that time. This was critically important to preserving native breeds as many of them were disappearing, the result of hunters not just mixing local breeds with imported setters and pointers, but also because German land reforms changed the viability of hunting as a trade in 1840.

Among these breeds was the Heidwachtel, or Heathland Quail Dog, a small, elegant, and versatile long haired gun dog. Slowly but surely, these quail dogs started disappearing, and the only places one might find one was on remote farms on the moors, particularly in Lower Saxony. In 1912, a breed specific club for the Heidwachtel was spear headed by the poet, Hermann Löns, his brother, and 68 other hunters who also established the breed studbook.  This was not, however, the only club in town, so to speak, nor was Heidwachtel the only name by which the breed was known. The other club was the Kleiner Münsterländer Vorsethhund, and the breed name this club used was ultimately the one by which we know the breed today, the Small Münsterländer, sometimes shortened to “SM.”

The moniker, Heidwachtel, didn’t vanish entirely, it’s the name the Dutch still use today. This isn’t a function of clinging to old ways. Münsterländ is an actual place name, a region of northwest Germany that borders the Netherlands, so it stands to reason that the dog from this area would be known as the Small Münsterländer which quite literally means “from Münsterländer.”  And lest you’re tempted to pronounce the name as “Mun-ster-lander,” know that you’ll be closer to getting it right if you say, “moon-ster-lahn-der.”

But we digress. Eventually, a unified breed club was established in the 1960s, but the formation of those clubs 50 years earlier probably saved the breed from extinction.