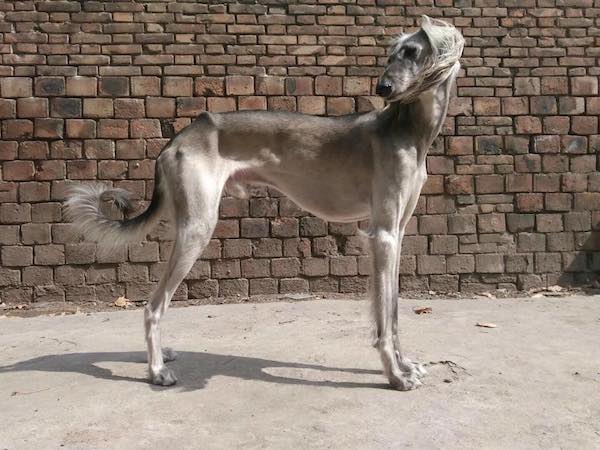 The Chinese god, Zhang Xian (also known as the Archer) often takes the form of a dog, and he is typically illustrated with a bow and arrow aimed at the sky, waiting for his arch enemy, “Tian-gu,” to appear. As the creator of eclipses, Xian is to be forgiven for his vigilance: Tian-gu, who appears as either a black dog or a meteor, eats the sun or moon during an eclipse.

Another “Xian” is a breed that has been known in China since at least 685 AD. This remarkable beauty is the China Shaanxi Xian Hound, a hound that some cynologists speculate just might be the principal ancestor of all sighthounds known today.

Once used to chase and capture prey on the open, flat land of the Huangtu Plateau, the breed is now in trouble, its numbers plummeting as a result of the government curbing the rights of its citizens to hunt. The China Kennel Union (CKU) classifies the breed as ‘rare,’ and is trying to resurrect it. To that end, the CKU initiated an effort to collect DNA from the dogs in 2017, even as other supporters have tried to introduce the Xian to the West to help preserve it.

The Xian shares similarities with other sighthounds: An attitude that views the world on their own terms, comparable ear and eye set to the Saluki,  “running gear” and compact feet found on several other sighthound breeds, and prominent hip bones. They are different, however, in their exceptionally flexible spinal column that helps the Xian leap, twist, and turn to overcome prey.

There is a Facebook page for the Xian Hound which you can find here, though it doesn’t seem to have been active since 2015. It is the source of the image.

One thought on “The Earthly Xian”