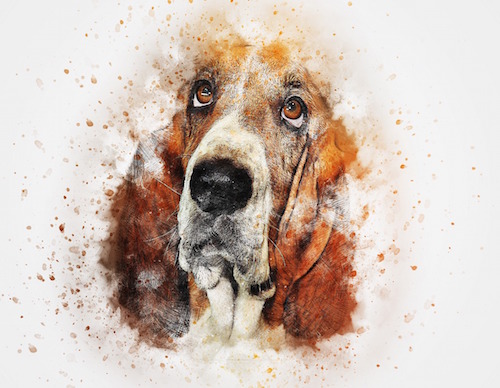 Basset Hounds were designed not only to hunt small game, but to do it in packs where “snarkiness” isn’t an asset. Breeding for hounds that cooperate is one reason the Basset Hound has a very sociable personality, even in non-hunting Bassets.

To our knowledge, there are now eight Basset Hound packs in the UK registered to the Masters of Basset Hounds Association, (plus a further two member packs in the USA). This includes the Woolaston pack, the first pack of hounds to have been formed since the Hunting Act 2004 was introduced in the UK. It requires packs to operate by following the trail of an artificial scent or by one of the other means of exempt hunting. The inaugural opening meet occurred in 2015 after the pack was given probationary registration by the MBHA the year before, and through the generosity of other established packs, such as the East Lincs, Four Shires and Westerby, the Woolaston was given three and a half couple of entered hound which provided the foundation for the future of the pack.  The country registered to the pack follows the River Severn and spans a wide sweep from Ruardean in the Forest of Dean through to Blaenavon, North of Newport to the flats under the New Severn Crossing.

The first five minutes of the video below offers a feel for what it was like to be in attendance at that opening meet of the Woolaston pack:

As an aside, the Masters of Basset Hounds Association was formed in 1912 exclusively with the Hunting Basset in mind. Before the Hunting Act of 2004, nearly all hunt connoisseurs agreed that hunting hare with a pack of Basset hounds represented the finest form of venery because little else matched the persistence, tenacity at holding the line, the deeper scenting abilities, and the cry of a pack of Basset hounds on a good day.