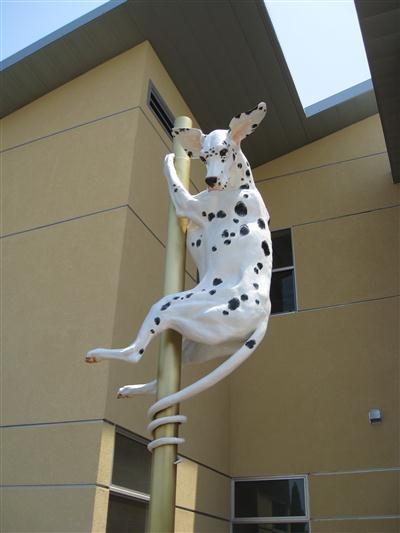 This one stands in front of San Jose Fire Station #12 in the Blossom Hill area of San Jose, California. Sponsored by the City of San José Public Art Program, the painted bronze created by Gerald Heffernon offers a twist on the fire man’s pole by having a Dalmatian sliding down the pole, his coiled tail ready to absorb his landing. Called “Spring-tailed Dalmatian,” the sculpture stands 13 feet high and includes an informational bronze plaque about this special breed of dog. 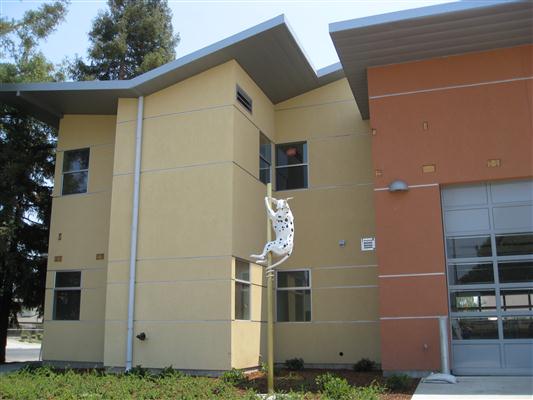 For anyone wondering, the fireman’s pole was invented in the 1870s by Chicago firefighter, David Kenyon. Up until then, firemen flew down spiral staircases or even slides, but neither was especially fast. As the story goes, the firehouse in which Kenyon (captain of Chicago’s Engine Company No. 21)  worked was three-stories high.  All the equipment and the horses were on the ground floor, the second floor had the sleeping quarters, and the top floor was the hayloft in which the winter supply of hay for the fire engines’  horses was stored. During transport, the hay was secured to a wagon using a wooden binding pole, which was stored in the hayloft when it wasn’t being used. On the occasion that another firefighter, George Reid, slid down the pole to respond to an alarm, Kenyon was inspired, and voila, the fireman’s pole was born.

Oh, to have been a fly on the wall when Kenyon asked for permission from his fire chief to drill a hole in the floors of the fire station. After Kenyon agreed to pay for maintenance, the chief agreed, and a sanded and varnished pole made out of Georgia pine was installed. For added slickness, a coat of paraffin was applied.

The ribbing from other fire stations was merciless, but a funny thing happened on the way to fires: Company 21 was usually the first one to arrive, especially at night. This was not lost on the chief of the department, and he ordered poles to be installed in all Chicago fire stations. The first brass pole to be installed came in 1880, and that honor went to the Boston Fire Department. Today we call them fire poles, but they’re also known as sliding poles, or toms.

After 150 years, fire poles are heading towards extinction, in part because firehouses are being remodeled, and building and safety codes are being re-analyzed, but also because there have been hundreds of injuries, and too many lawsuits resulting in multi-million dollar payouts.