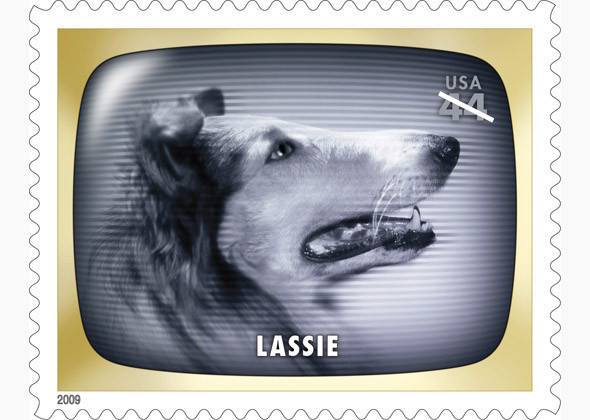 It’s stamp collecting, and postage stamps featuring dogs have been among the most appealing of small and affordable dog collectibles. Subjects range from Laika, the first dog in space, and Chinese Year of the Dog commemorative issues, to breed studies and cartoon dogs. More than 4,000 different dog stamps have appeared since the first one was issued, and it featured a purebred dog. Can you guess which breed was featured on the first stamp to feature a dog, and which country issued it? 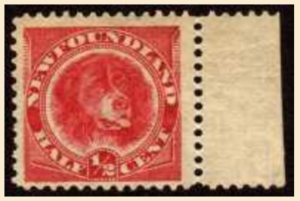 First Stamp with a Dog On It

According to Dog Biz, Newfoundland was the first country to issue a stamp which featured a dog, and it won’t surprise anyone that the breed that appeared on this stamp in 1877 (some put the date at 1880) was a Newfoundland.  It was a small, square half cent stamp

The stamp you see at the top is the face of Lassie.  The famous Collie’s stamp was issued in 2007 as part of the United States Postal Service’s series on Early TV Memories, and according to Mark Saunders, a spokesperson for the USPS, the Lassie stamp (as well as the 2012 “Dogs at Work series” based on the paintings of John M. Thompson and designed by art director, Howard E. Paine)  have been among the post office’s most popular issues.

If you’re interested in dog stamps, we have more posts on the topic,  just do a search for “postage stamp” on our search option at the top of the page.

2 thoughts on “The First Postage Stamp With a Dog – What breed?”