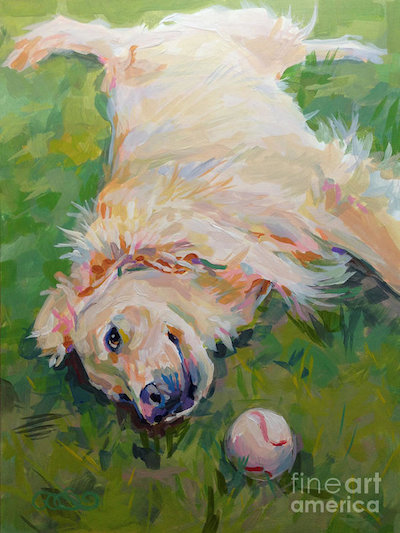 History tells us that when Lord Tweedmouth developed the Golden Retriever, his goal was to create a spirited, kind, energetic dog with a love for for water and a great enthusiasm for retrieving.  What he got was all of the above, and a dog with a fabulous ability to scent. Several lists rank the Golden Retriever as one the top ten “smartest” breeds, but we tend to be skeptical of such lists because so much of a dog’s “intelligence” depends on the specific behaviors being tested.
That said, we will mention that when the AKC introduced its official OTCH title in 1977, the very first one went to a little lady named, “Moreland’s Golden Tonka,” aka “Tonka.” Before she was done, “Tonka” earned eight perfect scores and 176 “High in Trial” awards. Oh, and the next two obedience championship titles also went to Golden Retrievers. Just saying.
“Seventh Inning Stretch” by Kimberly Santini
www.paintingadogaday.com
www.facebook.com/KimberlyKellySantini)
http://paintingadogaday.blogspot.com