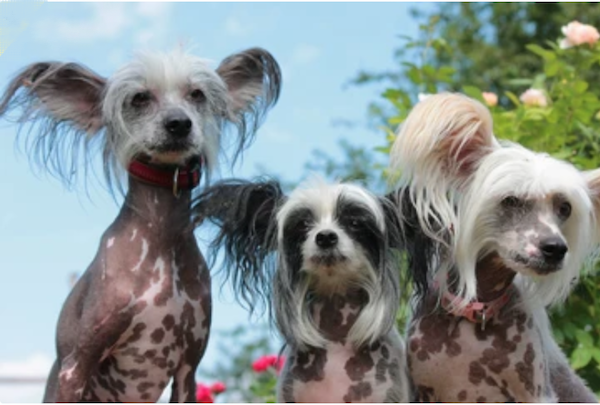 Even those with a casual interest in dogs know of the Chinese Crested Hairless breed, and most of those people are aware that in the breed, there is the Hairless version (the one that has hair on its head, feet, and tail), and the coated version, or Powderpuff. These are the two “coats” mentioned in the AKC breed standard.

Not every knows, knows, however, about the “hairy hairless” or the “true” hairless. Some would say that these are just other terms used to describe degrees of hairiness/hairlessness between the Powderpuff and hairless. Others have told us that most CCH owners use the terms, True Hairless, Hairless, Hairy Hairless, and Powderpuff to describe the “type” of Chinese Crested they have.

Every hairless Chinese Crested carries the dominant gene for producing hairlessness, the amount and extent of hairlessness varying. At one end of the spectrum is a puppy who can be born with little to no hair, and that pup is a true hairless. He carries the hairless gene as well as the puff gene, but it’s the hairless gene that determines that he is a hairless puppy, not the lack of hair on his body which is just a symptom of the hairless gene. Another “symptom” (though not apparent for a while) is teeth. The hairless gene comes with what is called a primitive dentition which consists of forward pointing, tusk-like canines. It’s common for hairless dogs to have missing teeth, to retain baby teeth, or never to grow adult teeth at all. As an aside, Puffs have normal dentition/set of teeth.

At the other end of the spectrum is a puppy either born naked, or with a fine layer of hair covering the majority of her body (but without an undercoat), and this is a “hairy hairless.” A hairy hairless is not the same as a Powderpuff. The difference between a hairy hairless and a Powderpuff is that the hairy hairless has a single coat with hairless parts on the body, while the Powderpuff has a thick double coat.

We were sent the vivid image below to show the varying degrees of hairy hairlessness; it was originally posted on Facebook by M.C. (using initials to protect privacy), but we don’t know the original “author” of it and would very much like to give credit, if anyone knows. The translation is: How to explain to someone the types of Chinese Cresteds that exist… 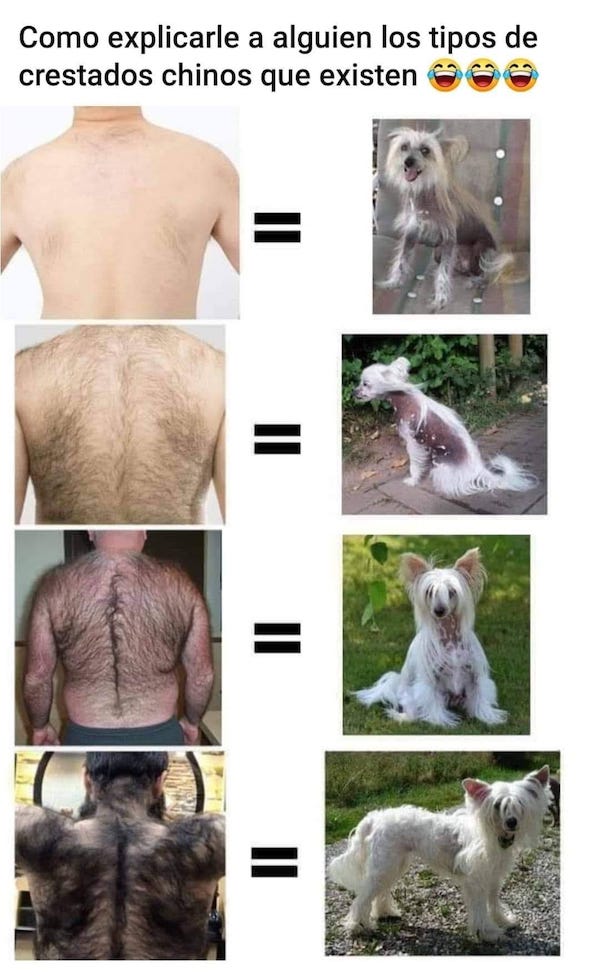 We may have the wrong end of the stick here, but our understanding is that a TH (true hairless) has less than 25% hair on its body not including it’s furnishings. A Moderate Hairless has hair on 50% of her body or less, hair that’s usually located in a inch wide strip down the back and the butt area; a Hairy Hairless,” or HHL, has hair covering almost, if not all, of her body. We’ve even seen reference to an extreme hairy hairless Chinese Crested which seems like a Puff, but in reality, is not. And finally, the fully coated Crested with hair and full indentation is, of course, the Powderpuff.

We always defer to breed experts, so if we got something wrong, please do let us know so we can correct it!