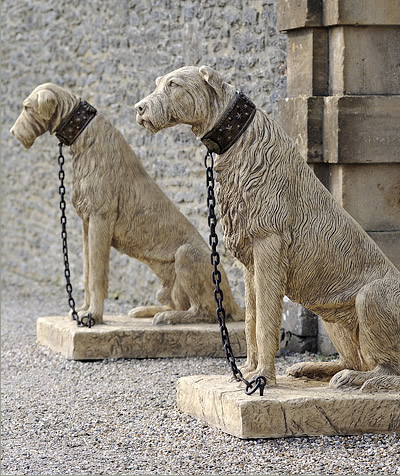 The “Ulster Cycle” is a body of medieval Irish heroic legends and folklore, and one of its tales has to do with a mythological hero named Sétanta. As a child, Sétanta killed a ferocious guard dog out of self defense after the dog’s owner, Culann, unleashed the hound not realizing that a child was on the property. Out of a sense of moral obligation, Sétanta offered to take the dog’s place until a replacement could be reared, and for this gesture, Sétanta was renamed, Cú Chulainn – or “Culann’s hound.” Legend says the killed watchdog was an Irish Wolfhound, and the antiquity of this Celtic fable underscores the breed’s age.

Some cynologists, however, have argued that the Irish Collie may be older than the Irish Wolfhound. They cite a common Gaelic dialect spoken by three groups of early Celts who occupied Ireland between the fifth and first centuries BC.  The Cruthins arrived before 500BC, followed by the Goidils and then the Erainns. The regional language was known as ‘Q Celtic’ from which the word “collie” is believed to have come, the word meaning ‘useful’ (etymologists may argue this point since it’s also been said that “Collie” comes from Coll, Colley, Coally and Coaly, Anglo-Saxon for “black.”)

Irish monks fled to Scotland when Vikings plundered their monasteries. They founded new monasteries on the outer islands of the Hebrides in the 6th century AD, and used this sheepdog original to tend their cattle and sheep. Irish Collies are believed to be the ancestors of many Scottish breeds.

Today, most working collies in Ireland resemble Border Collies, but there are rumors that or or two Irish Collies can still be found on isolated farms in County Clare or west Galway. As lovely as that would be, it’s difficult to believe the breed hasn’t vanished. Precious few books cover the Irish Collie, and only a couple of on-line sources mention it.

Image of a pair of Irish Wolfhound stone sculptures made by Cavendish Stone.