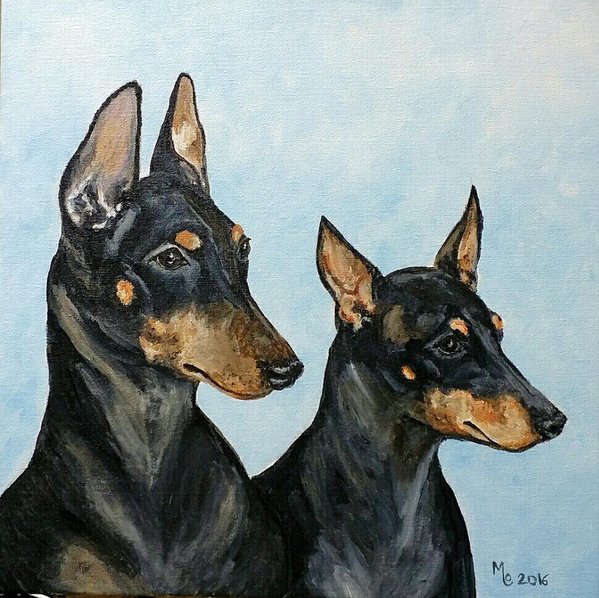 Pop Quiz: If you were asked to identify a breed that in 1859 was described as having smooth hair, a long tapering nose, a narrow flat skull, small and bright eyes, a chest deeper than wide, and black and tan (the only true color), what breed would you name?

If you said the Toy Manchester Terrier, kudos to you! Famous English sports writer, John Henry Walsh, writing under the pseudonym “Stonehenge” was the first to describe the breed in a way that hasn’t changed much since he first mentioned it in “The Dog in Health and Disease.” Though the breed name changed from English Toy (Black and Tan) to Toy Manchester Terrier in 1934, by any name, this was America’s “it” dog in the 1940s, while in the UK,  the breed became something of a rarity after the advent of modern methods of vermin control. Only eleven pedigree dogs were registered there in 1945. Happily, the breed has regained footing.

“Hamlet and Monet,” Toy Manchester Terriers by Monika Brauer is available for purchase as a print here.