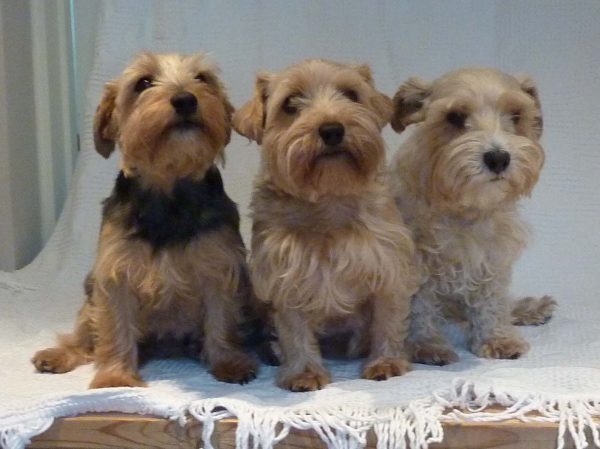 Not every breed we mention here is without controversy (heck, most breeds have at least one, if not in their history, then brewing), but we think they’re worth mentioning so that you have at least a passing knowledge of them. The Lucas Terrier is one such breed.

The Lucas Terrier was developed in the 1940s by Sealyham breeder, Sir Jocelyn Lucas,  and his business partner, the Hon. Enid Plummer. Dissatisfied with the ever increasing size and weight of Sealyham Terriers (which Lucas felt hampered the breed’s ability to work in the field), he bred a petite Sealyham with a carefully chosen Norfolk Terrier from the Colonsay line to create a nimble hunting dog that Sir Lucas described as “little Sealyhams wearing red jackets.”

That is the “official” version. The “unofficial” version is that Lucas, a clever marketer, made the most of an unplanned mating between two dogs being boarded at his Ilmer kennel and marketed the resulting puppies as “Lucas Terriers.” Whether Lucas agreed with a phrase attributed to P.T. Barnum (“there’s a sucker born every minute”), or he genuinely set out to create a breed to fill a niche, we may never know, but enough people were enchanted by the new breed to have carried it on after Lucas and Plummer passed away. A breed society was set up in the United Kingdom in 1987 to promote the breed, and in 1988, a breed standard was written. Lucas Terriers have been in the United States for over 60 years having been imported by Americans who saw them while traveling in Great Britain. A breed club now exists in America, and it’s thought that a little over 100 Lucas Terriers are in the country (as compared to the 400 thought to be in the UK).

The Lucas Terrier Club of America’s website indicates that certain combinations of breedings are still occurring: Approved mating combinations are acceptable as long as they are Lucas to Lucas, Lucas to Sealyham, or Lucas to Norfolk. The Sealyham and/or Norfolk must be a purebred dog registered with a recognized kennel club such as the AKC, and the Lucas has to be a direct descendent of one of Sir Jocleyn Lucas’s original Lucas terriers.

Image of Lucas Terriers from Wikicommons and shared under the Creative Commons Attribution-Share Alike 3.0 Unported license.

5 thoughts on “The Lucas Terrier: Scam or Planned?”