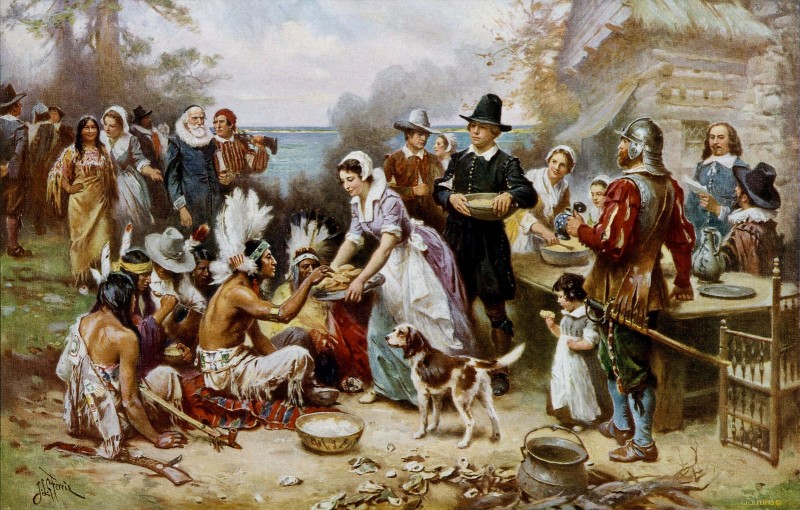 Thanksgiving in America has its origins with the Pilgrims who left Plymouth, England in July of 1620 in pursuit of religious and civil freedom. The ship had to turn back twice because “Speedwell,” the vessel it was traveling with, was a leaky mess. When the Mayflower finally decided to leave the Speedwell behind, it was already September.
For over two months, 102 passengers struggled through the turbulence of a storm-tossed sea.They made landfall at Cape Cod (more than 600 miles off course) in late November and began building shelters. Unprepared for inadequate food supplies and illness, nearly half of them died before spring. An English-speaking Pawtuxet named “Samoset” helped the remaining colonists form an alliance with the local Wampanoags who taught them how to hunt local game, gather shellfish, and grow squash, beans and corn. At the end of the next summer, the Plymouth colonists celebrated their first successful harvest with a three-day festival of thanksgiving. It’s a holiday we commemorate to this day.
History doesn’t dwell as much as we think it should on the dogs that were also on board the Mayflower. John Goodman, a 25-year-old Mayflower passenger, brought his Mastiff and English Springer Spaniel along for the voyage. Goodman’s dogs became essential members of the settlement who provided protection and aided in hunts. At one point, Goodman and a companion had gotten lost, and without the Mastiff or Spaniel, the men likely would not have survived the night. Sadly, Goodman didn’t survive his first winter in the New World, but pilgrims cared for his dogs after his death.
Image: A depiction of the first Thanksgiving (note the dog) by Jean Leon Gerome Ferris (1863–1930)

One thought on “The Mayflower Dogs”