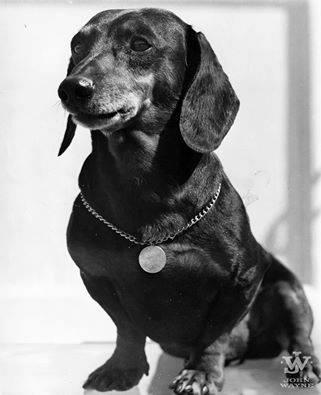 In the first month of 1958, a little Dachshund named, “Blackie” started barking his head off at 3 a.m. The lady of the house, “Pilar,” grabbed her 20-month-old daughter from her crib and flew out of the burning house into the night, but not before suffering a burn on the arm. Firemen were able to save furs and jewelry, but pretty much all the clothes, furniture, and personal belongings were lost. Most of the second floor of the house was destroyed or damaged.

House fires don’t discriminate, and this is a story that repeats itself every year. Not everyone is as lucky as Blackie’s family was, but the man of that house, out of town on business at the time, knew exactly how lucky he was. When actor, John Wayne returned from Japan where he’d been filming “The Barbarian and the Geisha,” he gave “Blackie” a hero’s medal.

Mrs. Wayne stroked the head of her pet Dachshund as she told the “Spokesman Review,” how “Blackie’s” barking alerted her to the fire that swept the second story of the actor’s $250,000 mansion. “We owe our lives to Blackie,” she said. “My little dog Blackie barked and jumped up on the bed. I jumped up and saw some fire, not too much, as the edge of the carpet. I took the baby from her crib to a safe place downstairs. Then I went back up with a fire extinguisher. But all of a sudden –whoosh- the fire just burst across the rugs and the records in the record player went up, poof, like an explosion. I couldn’t stay up there any longer and I ran back downstairs.”

She and the baby took refuge in the caretaker’s cottage.
From there she sent two wires to her husband. One asked simply, “How do you like one-story houses?” the other (signed Blackie) said: “I guess I’m a Peruvian national hero, but all I did was wake up Mommie and say, ‘Get me out of this house.’”

Said Mrs. Wayne, “Blackie always sleeps on my bed, and he always will.”