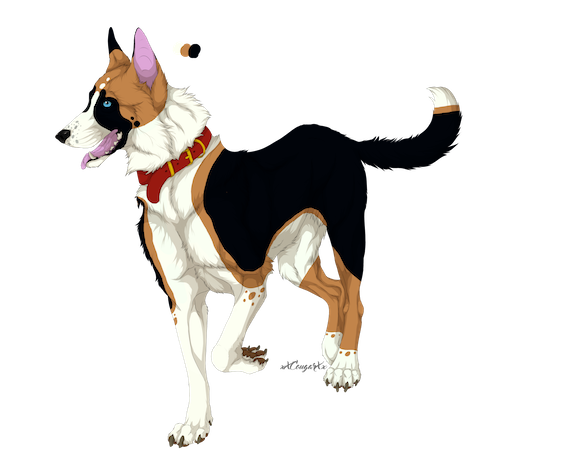 You’re going to want to know what a Panda Shepherd looks like, but as we don’t have permission to share any of the particular photos we found, click here to see what comes up on Pinterest. Getting back to the dog……

As far as we can tell, this is what is undisputed about the German Shepherd Dogs with white markings now known as, “Panda Shepherds:”

Back in 2000, two purebred GSDs (one registered with the AKC, the other with the German Shepherd Club Of Germany) were bred together and produced a litter that included a puppy with symmetrical white markings on her muzzle, chest, collar, belly, tail tip, and forelock. The puppy was named “Franka.”

The flabbergasted breeder had the University of California/Davis study a sample of Franka’s DNA which found the puppy to be a purebred German Shepherd Dog. However, further tests concluded that the cause of her remarkable coloring was the result of mutation of the KIT gene.

The KIT gene controls cell functions, and in Franka’s case, it inadvertently affected color. It’s believed that KIT mutated dogs can’t “carry” the gene with out expressing it. Unless a puppy randomly mutates the gene, one parent has to have a phenotypical (or visible) KIT mutation to produce offspring with the Panda coloring.

There is a test available through Veterinary Genetics Laboratory that allows breeders to determine if white patterning is caused by the KIT gene mutation. The Coat Color Panda White Spotting test (H354) tests for the genetic status of the KIT-gene. This gene has two variants (alleles), P and N. The allele P is dominant. One copy of the P allele results in dogs with the Panda white pattern. Two copies of the P allele result in early embryonic death. The allele N does have no effect on the coat color.

UC/Davis reported no health defect in German Shepherd Dogs that are heterozygous (one copy of the mutation) for the Panda pattern. OFA tests found Franka’s hips to be fair, and her elbows were normal. We did come across one site that mentioned blood disorders associated with Pandas, but we couldn’t find any corroborating sources.  The same site also mentioned hip and elbow dysplasia, but those are issues found in many breeds, and can be especially problematic with substandard breeders. And that leads us to the exploitation of a unique or rare coloring.

Since Panda German Shepherd Dogs are considered “rare,” there are those who see the dogs as money makers. When doing research on the breed, the following line was typical of what we saw on the Internet:  “Panda is the newest color variety of purebred German Shepherd Dogs. “Kennel Name” has had them since 2014. Limited availability!  This isn’t to say this particular breeder was a substandard breeder, but rather, to underscore the sensational tone of the tag line.

Needless to say, the color is hotly debated, and while it’s often dismissed as a result of crossbreeding, we simply couldn’t find evidence of that. The color, of course, is considered a fault in the show ring. No registry we know of accepts the dogs as a breed or variation of the German Shepherd Dog, and when asked on a United Kennel Club forum about registered a Panda, the UKC moderator replied, “You can submit the application and photos to us and it would be considered on a case-by-case basis.”

What became of Franka? Once she matured, she was bred to a traditionally colored black and tan GSD.  Out of the four puppies she whelped, three turned out to have black/tan/white coats but lacked the blue eyes, while the fourth puppy was the traditional black and tan coloring. The black/tan/white German Shepherd dogs (dogs that were 35% white) were given the name Panda Shepherds.

So, what say you? Is it appropriate to accept the color and “run with it?” Should it be accepted as a new breed, or a color variation of an existing one?  Asking now is a little like putting toothpaste back in a tube, but we’re curious to know your thoughts.

Image of Panda German Shepherd by Daasan was a free download

40 thoughts on “The Panda Shepherd”