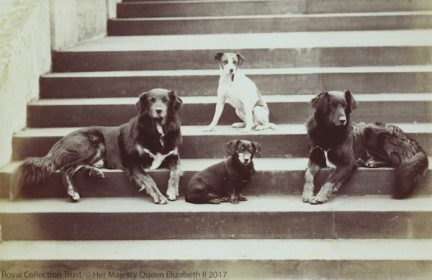 Anyone else with her collection of dogs might be considered a “collector” today because at various times, and often at the same time, Queen Victoria kept an assortment of Skye Terriers, Dachshunds, Pugs, King Charles Spaniels, Scotch Terriers, Pomeranians, Greyhounds, Deerhounds, and Collies (the last of which, according to the Royal website, the Queen owned 88). It was a particular pleasure of Her Majesty to watch her dogs from the window of a cottage situated near the kennels of  Windsor Castle when they were brought out to play. Though she may not have been as “hands on” as today’s Queen Elizabeth II who was known to breed, train, and fed her Corgis, Victoria was still keenly interested in her dogs and never allowed any of them to be muzzled, destroyed, cropped, or docked. She named each newborn puppy, and often rode in her pony carriage to have her head kennelman present different dogs for her inspection.

Her fondness for dogs was legendary and extended to the “railway dogs” licensed to roam train stations to collect for charity, including widows and orphans of firemen. Victoria had a fondness for several of these dogs who wore collection boxes on their backs, but her special favorite was ‘Tim’ an Irish Terrier at Paddington Station. Tim would bow gracefully to the Queen each time she put a gold sovereign into his collection box.

Image of some of Victoria’s dogs from the Royal website

4 thoughts on “The Royal Dog Lover”