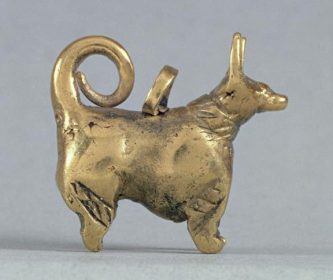 If there’s a group of people as good at debating an issue as dog people are, it just might be archeologists. We found conflicting opinions on the origin of dog collars, of all things.

Although Egypt is credited with the invention of the dog collar, some experts believe it was more likely developed in Sumer, a part of ancient Mesopotamia that today is Iraq and Kuwait. A golden pendant of a dog that many believe to be a Saluki (albeit a very fat one) was found at the Sumerian city of Uruk and dated to 3300 BCE, while a cylinder seal from Nineveh (dated c. 3000 BCE) also featured a Saluki.

There seems to be less debate on the origins of spiked collars.  Ancient Greek farmers have been credited with creating a spiked or barbed dog collar called a melium as a way to protect their dogs’ throats from being ripped out by predators. In addition to keeping a dog attached to its owner, dog collars were an important sign in the Victorian era that a dog was owned. The more expensive looking the collar, the greater the fine owed by the owner if his dog was killed during a routine roundup of stray and feral dogs.

As long as we’re on the subject, there was a time when the color of a dog’s collar could be an important sign of ownership. King Charles VIII owned 24 dogs, and each wore a black velvet collar with four ermine paws dangling from them – the white part symbolizing the Brittany coat of arms. The French king, Charles IX,  owned 36 “miniature Greyhounds (probably Italian Greyhounds) each of whom wore red and green velvet collars, while the dogs belonging to his sister-in-law, Mary Queen of Scots, wore blue velvet collars.