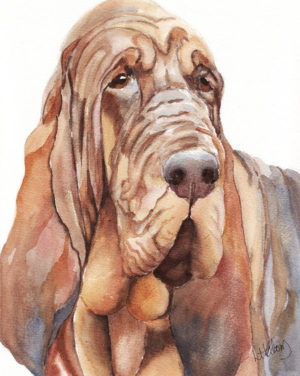 At one time, Bloodhounds were also called “Slough dogs,” a result of working in the sloughs, bogs and mosses in pursuit of “bad guys” or Moss-troopers, 17th century brigands or deserting soldiers from one of the Scottish armies who operated across the border country between Scotland and the northern English counties. Slough hound may also have come from the term “Slot hound,” “slot meaning “to track.  The name was used by Sir Walter Scott in Lord of the Isles, though the breed’s Latin name was Sanguinarius.

This oldest and largest of the scenthounds was also known as the Sleuth Hound for obvious reasons, the name by which it was more commonly known in Scotland.

Some people were erroneously under the impression that Bloodhounds of Europe were the same breed as that which was developed in the tropical parts of America to hunt escaped slaves, the “bloodthirsty” Cuban bloodhound.

Some experts believe breed’s names stems from the extreme care that was taken to keep the breed pure going all the back to the twelfth century and even earlier. “Blooded hound,” referred to the purity of the breed’s pedigree, its ownership almost exclusively limited to people of nobility. “Blooded hound,” meant “aristocratic.”

As it happens, John Caius, author of Of Englisshe Dogges written the late sixteenth century, believed that the Bloodhound got its name from its use as a limer, a dog that followed the blood trails of wounded deer and boars. Kept on a leash called a “lyam” in Middle English, the association to blood was easily established.