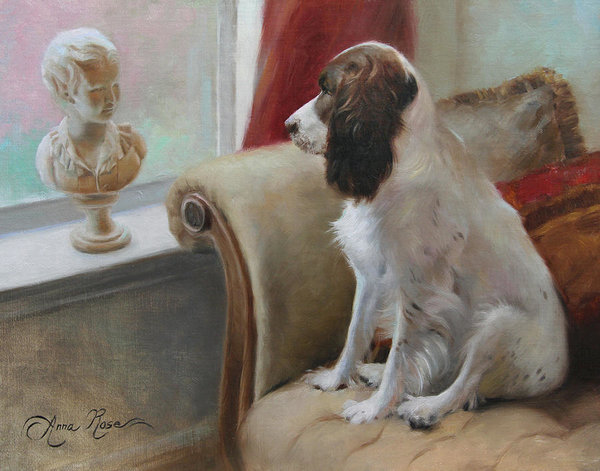 Who doesn’t love a good dog legend? This one points the finger at a dog that may have been responsible for the foundation of the Church of England. The story begins with Henry VIII.

Wanting to secure permission to annul his marriage to Catherine of Aragon, Henry sent his ambassador, Lord Wiltshire, to Rome to get it. As was the custom of showing one’s respect for a pontiff, Lord Wiltshire entered the chamber, then knelt to kiss his Holiness’ toe. To make things easier for the diplomatic, the pope raised his foot.

Things might have gone more smoothly had Lord Wiltshire not brought his spaniel along. The dog, possibly mistaking the Pope’s sudden move as a threat against his master, leapt forward and bit the toe. Historians speculate that because the dog had been crouching, then suddenly sprang into action, the spaniel was of the “springer” variety.

It was bad enough that Lord Wiltshire was the title belonging to Thomas Boleyn, father of Anne Boleyn, and the reason Henry wanted a divorce in the first place. Such a riotous scene followed “the bite,” however, that Wiltshire beat a hasty retreat from Rome, and had to tell his prickly sovereign and future son-in-law that his mission was unaccomplished.  Furious that he couldn’t get a legal divorce, Henry chose to divorce the church, instead.

The story was included in the chapter, “The Life and Story of Archbishop Cranmer” from “The Acts and Monuments” by John Foxe (1516-1587):

“And when the time came that they should come before the bishop of Rome to declare the cause of their ambassage, the bishop, sitting on high in his cloth of estate and in his rich apparel, with his sandals ‘on his feet, offering as it were his foot to be kissed of the ambassadors ; the earl of Wiltshire, disdaining thereat, stood still, and made no countenance thereunto, so that all the rest kept themselves from that idolatry. Howbeit, one thing is not here to be omitted, as a prognosticate of our separation from the see of Rome, which then chanced by a spaniel of the earl of Wiltshire, For he, having there a great spaniel which came out of England with him, stood directly between the earl and the bishop of Rome, when the said bishop had advanced forth his foot to be kissed. Now whether the spaniel perceived the bishop’s foot of another nature than it ought to be, and so taking it to be some kind of repast — or whether it was the pope’s will of God to show some token by a dog unto the bishop of his inordinate pride, that his feet were more meet to be bitten of dogs, than kissed of christian men — the spaniel (I say), when the bishop extended his foot to be kissed, no man regarding the same, straight-way (as though he had been of purpose appointed thereunto) went directly to the pope’s feet, and not only kissed the same unmannerly Avith his mouth, but, as some plainly reported and affirmed, took fast with his mouth the great toe of the pope, so that in haste he pulled in his glorious feet from the spaniel : whereat our men smiling in their sleeves, what they thought, God knoweth.”

It makes a good story, either way.

Image: “Getting Acquainted” by Anna Rose Bain is available as a print,poster or greeting card here.