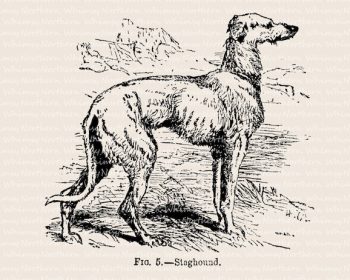 Staghound. Few terms in dogdom seem to be as unclear as this one. It’s been described as being anything from a Scottish Deerhound to a Greyhound. To wit: In 1903, William Drury wrote that the “Scotch Deerhound” was frequently referred to as the Staghound. He adds, “…to prevent confusion, as in England the Staghound is a totally different dog, hunting by scent alone, and often simply a large Foxhound.”

What we know with certainty is that Staghound is not recognized as an official breed. It typically refers to various large hounds similar to the Greyhound and/or Deerhound, but these are heavier dogs used in coursing stags and other large game animals. A few are closely related dogs bred as hunting and running dogs, including the Australian Staghound and the American Staghound, but neither of these is recognized by a registry.

References to staghounds are found in “The Common Hunt” of 15th century Great Britain, while the first dog to be recognized as a Staghound (at least in Australia) was brought into that country in the 1700s by European settlers. Its origins were traced back to a Deerhound and Greyhound cross-breeding. From there, it was introduced to America in the early 1800s where it was used to chase coyotes, wolves, and other aggressive animals.

A different source writes that early settlers brought with them hunting dogs from Britain, but because hunting conditions in Australia were so very different than in Britain, settlers started to experiment with different breeds and crossbreeds to find the best hunting dog for the country’s harsh conditions.   The Greyhound was an obvious choice because of its excellent eyesight and exceptional speed, but its soft feet didn’t tolerate tough terrain, and its short coat fared even worse.

Crossing Greyhounds with Deerhounds made sense to these breeders since the Deerhound had very tough feet, a harsh shaggy coat, and a stronger body. In those days, Deerhounds were also called Irish Greyhounds, Rough Coated Greyhounds, Scottish Staghounds, Scotch Grey Hounds and Highland Greyhounds, and this may have had some bearing on the confusion over what a Staghound actually was.

Additional experimental breedings took place involving Borzoi and the Irish Wolfhound, but by and large. most Staghounds could be traced back to a Deerhound/Greyhound cross.

The American Staghound is also not recognized as a breed, but it’s a type of sighthound used to pursue a variety of quarry. Three coat types have emerged within American Staghounds: The “shag,” which closely resembles the coat on a Scottish Deerhound; the “slick,” which more closely resembles the Greyhound, and the “broken,” which is in between the two. It’s known that General George Custer used the Staghound in 1846 as part of his pack of hunting dogs. In his book, Life on the Plains, Custer wrote: “At Ft. Leavenworth I halted in my journey long enough to cause my horses to be shipped by rail to Ft. Hays. Nor must I omit two other faithful companions of my subsequent marches and campaigns named Blucher and Maida, two splendid specimens of the Scotch staghound, who were destined to share the dangers of an Indian campaign . . .”

The more we research, the more definitions we found for the Staghound. Failing all that, there’s always the Urban Dictionary’s definition of a staghound: “It’s a guy that smells like a hound, but is stagnant as hell. He is more than likely fat as a whale, and 99.9% of the time smells like dog a**. Therefore you call him a staghound.”